Anna Arnold Hedgeman’s biographer Jennifer Scanlon traveled to Hamline from Maine to speak on the influential life of the Hedgeman Center’s namesake during their annual Dr. King memorial lecture series. 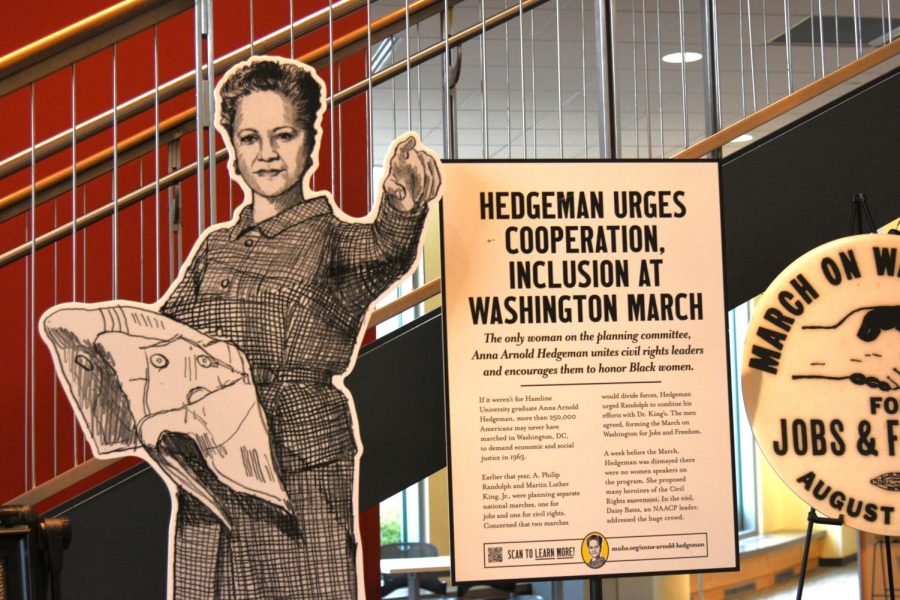 A display set up by Hedgeman Center student workers showcased Anna Arnold Hedgeman’s many contributions to the Civil Right movement.

Last week the Hedgeman Center hosted their annual social justice week. To kick off the symposium, the Hedgeman Center invited historian Jennifer Scanlon to deliver the keynote address on Tuesday, April 5. Scanlon— a Women’s Studies professor and Dean of Academic Affairs at Bowdoin College— centered her lecture on the life and work of Anna Arnold Hedgeman, Hamline University’s first graduate of color and namesake for the Center. Scanlon had previously written a book about Hedgman, “Until There Is Justice: The Life of Anna Arnold Hedgeman.”

Professor Samuel Imbo, department chair and professor in philosophy, and Professor Kristin Mapel Bloomberg of the women’s studies department, helped to welcome Scanlon to the podium. Imbo spoke of the generations of keynote speakers who have come to Hamline for this lecture series, and recognized the continued importance of these conversations.

“The struggle is moving onto a different time, and so those of us who engage in these things have to think about the ways in which we continue the conversations,” Imbo said.

“The goal [of the lectures] is to really inform students and get them engaged with learning about the people like Anna Arnold Hedgeman and getting engaged with wanting to learn and address any racial issues and injustices that occur,” Sanchez Dominguez said.

Scanlon began her keynote by thanking those in attendance and those she had spent time with on campus prior to the event.

“I want to say thanks to all of you for being here tonight…this is what this work is about. All our work for social justice is about thinking the next generation of people will make things better,” Scanlon said.

Scanlon made clear that while she did not presume to speak for Hedgeman, she wanted to acknowledge and share her life and body of work.

“As a historian, I’ve long been interested in what we recollect about our past…which people are included, and which are left out,” Scanlon said. She then proceeded to frame why she would be talking about Hedgeman, explaining that her hopes for the lecture were to view history through a social justice lens, and to use the life of Anna Arnold Hedgeman as a way to do it.

The lecture went into the life of Hedgeman and the many eras that defined her work. Scanlon spoke on Hedgeman’s years at Hamline and how formative they were, but also how difficult they must have been as the only person of color on campus.

“[Hedgeman] found professors who believed in her, as well as those who did not,” Scanlon said.

She went on to talk about the social and political causes Hedgeman was involved in and fought for, such as her involvement in helping to diversify the civil service in New York City, and her contributions to the Civil Rights movement. Hedgeman was a member of the National Council of Churches, an organization that was often conflated with communism due to its desegregation initiatives which Hedgeman supported. Scanlon also highlighted the many ways in which being a Black, educated woman made engaging in these environments difficult.

“I can offer you innumerable examples of Anna Arnold Hedgeman facing off against white coworkers, Black male politicians, the FBI, her religious allies, her feminist allies, the State. As one of her contemporary religious leaders put it, ‘Hedgman always made sure her voice was at the table,’” Scanlon said.

Scanlon concluded her concise but not exhaustive presentation of Hedgeman’s life and left the audience with lessons she learned in her research, encouraging those in attendance to take them into their own lives.

Scanlon’s presentation on an important figure and activist in Hamline and U.S. history was an appropriate way to begin the Hedgeman Center’s social justice week. Other events last week included panels on Critical Race theory and Asian-American Identity. For future events and speakers, The Hedgeman Center’s calendar can be found on Hamline’s website.