Curating the Art of Protest 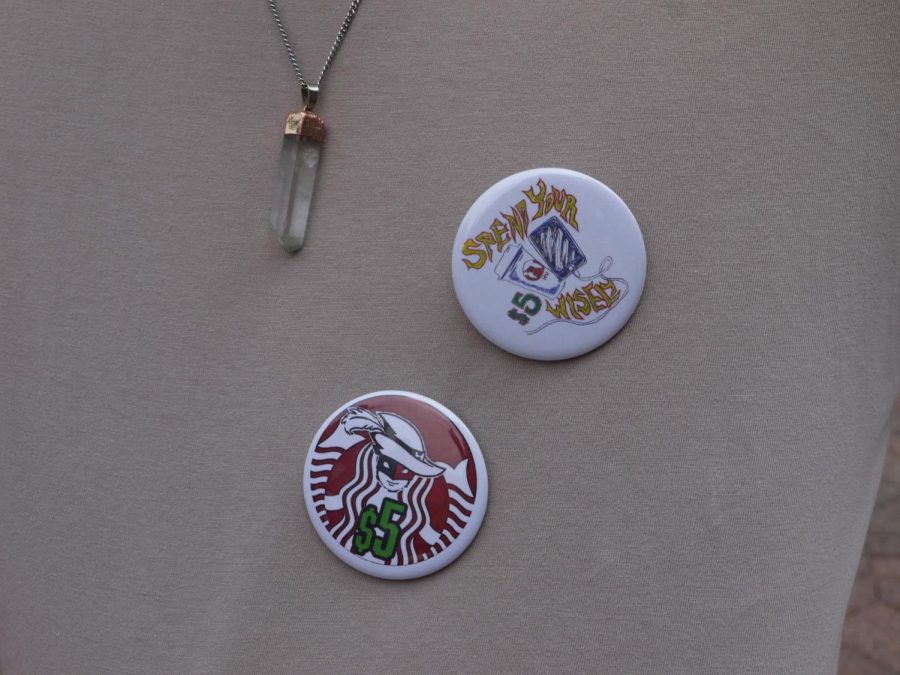 As Hamline students overtook the grassy outlook of Old Main to protest remarks made by President Fayneese Miller days prior, music and art spread throughout.

At the protest on Sept. 15, many students were branded with a sticker created by junior Max Ridenour.

“I wanted to promote this event, the protest and student resistance to [Miller’s] comments and student collectiveness through just some tongue-and-cheek reference to what was said,” Ridenour told the Oracle.

The stickers show a red Starbucks logo with the Hamline Piper on its face and a green ‘$5’ at the bottom. Ridenour himself wore a pin with an iPhone and a Starbucks logo reading, ‘Spend your five dollars wisely.’ Both creations, Ridenour explained, referenced Miller’s comments that were made to a group of student leaders on Sept. 11.

“Part of what offended me about the comments is that I feel like there is this equation being made between having the money to buy nutrition and sustenance for yourself and having an iPhone and disposable income. And I would not say that that is a fair equivalency to draw,” Ridenour said. “By using these as symbols of … the response to President Miller’s comments, I am trying to make the point that spending money on those things is a fair use of your money: that you don’t need to feel guilty for not giving your $5 to Hamline.”

Ridenour told the Oracle that they have always felt art is the best way for them to share their feelings towards different issues with others.

“I’ve always felt like that’s the most direct form of translating how I feel into a medium that other people can access and also use for themselves,” Ridenour said.

Sophomore Cameron Stockwell shared with the Oracle that he too believes that the use of stickers and pins are important for spreading students’ messages.

“For me, wearing this stuff spreads awareness. I’m hoping this will kind of spark a conversation, as well. Like ‘what does your pin mean?’ So we can talk about and spread that Hamline has a lot of issues that we need to work on and that we will hold administration accountable,” Stockwell said.

For senior Michael Horton, these stickers serve as a reminder.

“If we had something to pass out to people sort of as a support icon or to remember and to keep this trend going throughout this whole semester because… this is not a one and done thing … to me this is wise,” Horton told the Oracle.

Hamline sophomore and co-leader of Thursday’s protest, Abi Grace Mart, agrees that art holds a place at protests, especially this one. In fact, Mart shared that the entire protest started with one of her friends wanting to create a sign. After that, Mart and her other friends thought, “What if we did a protest?” Mart told the Oracle.

In between student and faculty speakers, Mart decided to play from a ‘Teenage Dirtbag’ playlist through a loudspeaker at the front steps of Old Main.

“I think it’s fitting,” Mart said. “One of the things about something like this, especially something that is going on for hours, is maintaining the energy and momentum.”

Mart also told the Oracle that the music symbolized the students’ concerns regarding Miller’s comments and actions following student uproar.

Through the use of their art, Hamline students both physically and metaphorically expressed their feelings towards the President’s comments.