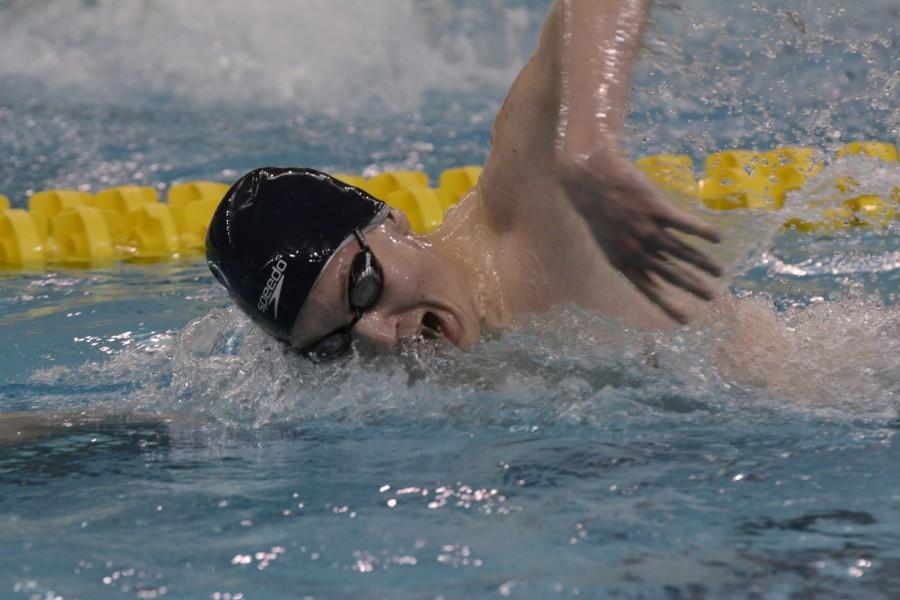 First-year Hodd Gorman had a record day, day one of the MIAC Championships on Feb. 19.

“This year’s team is an entirely different team than what we had last year. A lot more dedicated, they’re a lot more serious about their academics and more intuned in the classroom and they have a lot more support for our institution than what we’ve seen previously,” Ryan Hawke, head coach of the men’s and women’s swim and dive team, said. “Going in and having that team unity and that team mentality I think is only going to bode well for the performances this weekend.”

Piper men’s swimming and diving finished at sixth place at the 2015 MIAC Championships as the women’s placed eighth. Seniors Jerry Daniels and Hannah Hawker finished their careers on a high note as Daniels set a personal best on the 200 meter medley and Hawker set the school record on the 100 meter backstroke, the previous mark was set in 1981. First-year Skiah Garde Garcia also performed well in his MIAC Championship debut as he placed third on the 1-meter dive and second on the 3-meter dive event, earning him two All-MIAC honors and an NCAA regional qualifier.

Junior Victor Lara was confident the Pipers would do well at the meet because he said the one thing he knows about the Pipers is that they’re “passionate.”

“We’re driven free, all of them are trying to give their best to achieve better results,” Lara said.

Lara helped the team in the 400 and 800 meter freestyle relay and the 200 medley relay. The men’s goal was to get fifth place and first-year Hodd Gorman said he thought those relays would be crucial. Entering his first conference championship meet, Gorman said he was both excited and nervous heading into it. However, he said receiving the MIAC Athlete of the Week for swimming and diving in the first week of February gave hims some confidence.

“That gave me a confidence boost because it put me up with, like, the better people in the MIAC,” Gorman said.
Gorman participated in the relays and finished well in his individual events as he placed fifth in the 1650 meter freestyle and finished seventh in the 500 meter freestyle, an event he set the school record for as he broke the original mark set in 1979 by three seconds with a time of 4:43.

First-year women’s swimmer Kaitlyn Allee also participated in her first MIAC Championship and competed in four events. Allee was confident the women’s side would have a few finishes in the top 16.

“I think we have a good chance of doing really well in our relays because we have a great group of girls this year,” Allee said. “I think some of us have a good shot at making top 16 and making it back to finals.”

Hawke also complimented Hawker on joining each of the relay lineups and in the process giving up one of her individual events.

“She’s more concerned about what her teammates are doing,” Hawke said. “She wants to help out with the team wherever she can.”

In Hawker’s final outing in the MIAC Championships, day three, she finished 11th in the 200 meter backstroke. On day two of the meet, she set the school record for the 100 meter backstroke with a time of 0:59.32 and she came in fifth place for that event.

As the MIAC Championships come to a close, so is the collegiate swimming career of Daniels, a two-year captain on the men’s team. For Daniels, this ends an activity he’s started since the eighth grade when a teacher during swimming lessons in physical education asked if he’d consider joining the swim team. Since then, he was a standout and in high school he won numerous events and set school records.

When Daniels was a first-year on the men’s swimming and diving program there was only six other swimmers on the squad. Daniels said he remembers his first meet on the squad at the Augsburg Pentathlon. He said former head coach of the swimming and diving program, Frank Vaccaro, showed him the score sheet and he found out he was the team’s highest scorer.

Daniels said he’s glad that that’s been the only time he’s been the leader in points for that meet because the team since then has added more talent.

Daniels said what he wants to be remembered for the most is being a good leader and being there for his teammates when they need him.

“I want them to remember that when times got tough I was there for them, no matter what, if they needed something they could come to me for it,” Daniels said.

Daniels said the biggest lesson he’s learned from his experience on the team is “humility.”

“Even when it comes to a time where you lose as an individual you still have to be humble about it,” Daniels said. “You may not have had the best swim of your life but maybe somebody next to you did…that’s something I do after every race, I always shake the hands of the people that are next to me.”