HUGE Improv Theater is all the buzz

With a show that makes the audience a fly on the wall at a family dinner, the holiday season is full of potential for just what will happen around their table. 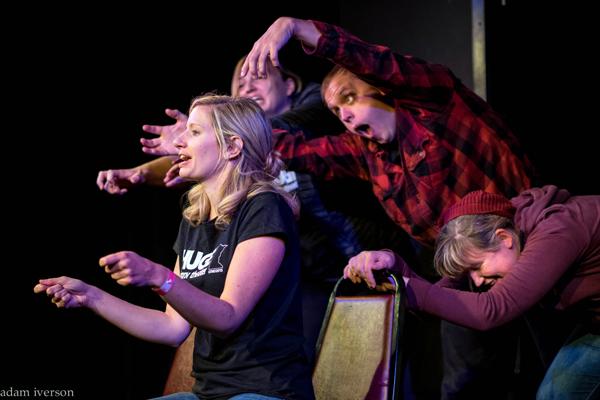 September’s show “Super Good” with four of the five person cast working together to communicate a scene.

There’s an oversized table in the center surrounded by family already alive with rapid conversation while a full spread tantalise their tastebuds. It’s a family holiday gathering, and everyone watching from the audience is just a fly on the wall.

“Family Dinner: The Improvised Holiday Feast” at HUGE Improv Theater aims to provide just that situation, with a cast of 21 characters filling the seats instead of a true family. The first instinct is to assume this will be comedic, but Michael Ritchie, creator and director of the show, explains it differently.

“Family Dinner is not a comedy—it’s a drama done by funny people,” he said.

But more than the possibility of humor, it has the potential to go in several different directions when talented people are thrust into a performance scriptless.

HUGE Improv Theater focuses on longform improv which is an improvised play that may have a set form ahead of time, but each of the individual scenes within have no guides or scenes written out. HUGE is artist-led and non-profit, focused on supporting the Twin Cities improv community.

For “Family Dinner” specifically, the show will be two acts long, all without a script. Act one has the family coming home for the shared meal while act two follows at the table itself where the actors will feast on real food—an abnormality in the improv world where props are usually mimed.

To make matters even more interesting, each of the characters is keeping a secret from the others. When the show begins, each one is assigned their secret and as they eat, it may or may not come out.

The audience on any given night will bear witness to only what happens that show. Without scripts or guides, what happens on one night might be entirely different the following. Butch Roy, executive director of HUGE and an actor in “Family Dinner,” described the show’s charm.

“I think the appeal is that it’s so immediate…You don’t get the idea that ‘A Christmas Carol’ was somehow different because you were in the room for it—and audiences are so with you in a way that they aren’t for scripted theater,” he said. “This immediacy makes improv theater that has to be live theater, it doesn’t survive reproduction…it only ever happens the same way once.”

Ritchie, recently, witnessed a prime example of how engaging the unique, unfolding scenes can be.

“I saw an entire audience leaning forward in their chairs, hanging onto every word spoken by the cast while they were at the dinner table. After the show, that same night, I overheard an audience member say to his friend, ‘I was afraid to laugh because I didn’t want to miss anything!’”