Naughty for all the right reasons 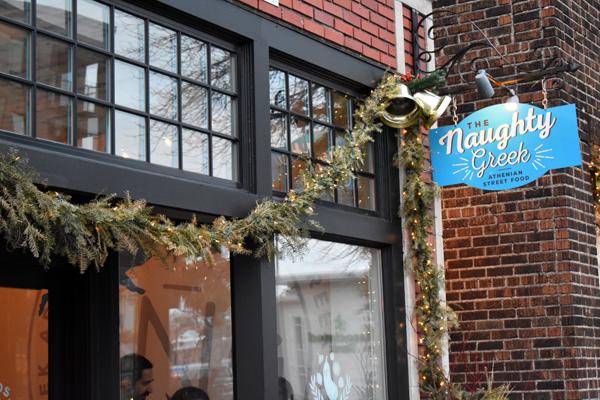 The Naughty Greek is located at 181 N Snelling Ave. They are open Tuesday through Sunday starting at 11 a.m. with closing varying based on the day.

Cold air swirls around hat-covered heads and breaths puff out into visible clouds around ducked down faces, all eyes locked onto the ground slick with ice down the sidewalk alongside Snelling Avenue. With a slight turn, as the door swings open, a sudden warmth of slow-roasting meat and smiling faces instantly melts the Minnesota frost covering each arriving guest as they find The Naughty Greek.

The new Greek spot is constantly filled with an overwhelming, comforting smell of pork and savory spices from the spits roasting just behind the counter in the intimate spaces. These spits, like the seasoning mix on top of them, are made in house the slow, homemade way as opposed to the traditional pre-made meat spits Greek restaurants also feature.

The reason for their new approach is owner Angelo Giovanis.

“I don’t compromise the quality on anything,” Giovanis said. “Nobody would know the difference, but I do.”

In opening this restaurant, which recently opened its doors in November of 2016, Giovanis wanted to expose people to the food he missed from his own home in Greece, which he left at 18 to attend university in Brussels, Belgium where he’d eventually meet his wife, Kristen.

However, opening a restaurant was never originally the plan. Growing up, his parents owned and operated a restaurant.

“I had promised them I would never go into the restaurant business,” he said.

Yet, after the move to America, while he was working in the medical device industry, he couldn’t help but notice the absence of the food he’d grown up with.

“I kept missing this good street food, and I thought, ‘Why isn’t anybody doing this?’”

As time went on, it became apparent that the Athenian street food he was craving simply didn’t exist over here, so creating it himself was on the horizon but not everything was ready yet. So, a couple attempts later and a stint in culinary school in Minneapolis as a hobby, Giovanis was driving down Snelling heading towards one of his cooking classes only to see the emptied space with an advertisement in the window: “Kitchen for Lease.”

“I made a U-turn and called the numbers, called the landlord. I picked up the space. It’s been culminating for a very long time,” he said. “I put all of my thoughts and ideas into this little restaurant.”

Space secured, he had his work cut out for him. Giovanis had never done all this planning before.

“That was a whole learning experience,” he said. “You learned along the way.”

First, there came an architect to create the space—especially considering the small dimensions. To compensate, they added windows. After designing, there came the actual plans. The plans went to the city for approval. Next, a contractor to enact the plans and put in a commercial kitchen. A slew of more inspections and approvals and the space was shaping up.

“That process started mid-July and went through the end of September. That’s the time we needed to get all those taken care of.”

Along with the physical space, the brand had to be created. Once they had the name, the rest of the design had to follow. The serving papers, which feature cheeky doodles and slogans along the lines of “Take Out + Make Out” or “Eat. Talk. Drink. Kiss. Shout,” the logos and the website were done by the marketing company Ideas That Kick.

All the playful elements in the brand stemmed out from the name, which came from closer to home.

Kristen suggested the name “The Naughty Greek.” To her, the idea was “catchy and fun” and a name people wouldn’t forget. However, for Giovanis, the reason he accepted the playful name was because it connected to himself and his mission.

The answer is that Americans don’t know the difference, but to Giovanis, that only presented a challenge to educate everyone on the food culture he missed.

“If you really jump out of a plane and go to Greece, if you ask for a gyro, you’ll never find lamb to put in your pita.”

On top of challenging the traditional menu for Greek food served in America, Giovanis wanted to serve the same ingredients he remembered. That means feta, Greek yogurt and virgin olive oil from Greece, currently sourced through Bill’s Imports primarily. The high quality of the ingredients means every piece is more expensive, but Giovanis did not waver in his standards from the crumbled feta cheese on top of The Naughty Fries to the feta used inside dips, it’s all the same quality.

Other ingredients, meat and produce, are sourced locally or regionally and delivered three times a week to preserve the same fresh quality. The menu is kept small for the same reasoning to focus on ordering larger quantities of simple ingredients so each one is of high quality.

“We’re doing it right, we’re not cutting corners,” he said. “That’s where I feel The Naughty Greek name, by what I’m doing in my actions.”

Those high standards are exactly why The Naughty Greek makes from scratch traditional gyro meat spits daily. The process is labor intensive, which is why it’s typically replaced with a pre-combined meat spit similar to meatloaf. However, at The Naughty Greek, it’s done the naughty way.

“We get fresh meats come in on Tuesdays, Thursdays and Saturdays. Three different cuts. Those we slice really thin, every single one of those pork cuts gets sliced very, very thin,” Giovanis said.

Next, comes the housemade seasoning rub which is a blend of seven or so spices. Then, each slice is covered with this flavor and marinated in sheet pans overnight to let the seasoning absorb. Only a day later will the spit be built.

“There’s a very large skewer that’s standing upwards. You take the slices and you place them over the spit, skewer the meat, layer to layer to layer. That’s the way you build it,” he said. “Then, you put it on the fire and you let it cook really slowly. To serve, you shave off the roasted part of it, that’s what you put in your pitas.”

The entire process takes two to four hours for each one of the full-sized spits, yet it’s that process from the mixed spices to the careful layers of pork belly slices balancing on top of lean shoulder cuts in a perfect 20-80 ratio to preserve both flavor and the healthy aspects of the famous Mediterranean diet that create the smell as one steps through the door.

It’s smell that melts the chill in the Saint Paul air as one enters The Naughty Greek. That smell, warmth and cozy space that feels just like the golden glow of a memory- even if it’s someone else’s.

For anyone interested, The Naughty Greek is located at 181 N Snelling Ave. They are open Tuesday through Sunday starting at 11 a.m. with closing varying based on the day. Their menu does feature vegetarian options and they deliver via Bite Squad and Grubhub. Prices across the board are reasonable with gyros under $10, appetizers and desserts hovering around $5 and larger entrees reaching at maximum $20 (besides the family platter).