I rah, you rah, we all rah for Rah’Mn

Rah’Mn, a build-your-own ramen spot, is bringing a fast casual version of a classic Japanese dish just a few miles from Hamline’s campus. 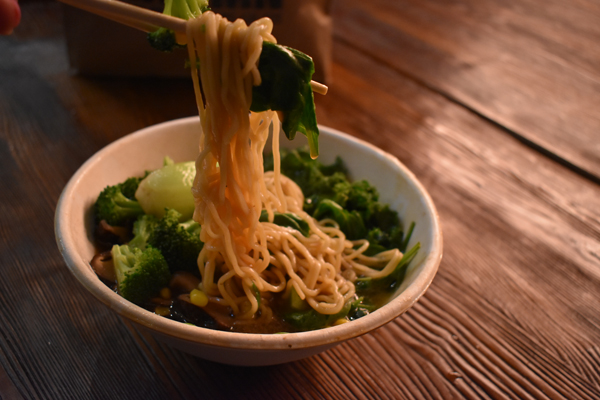 A bowl of warm ramen noodle soup with corn, bok choi and kale soaking up the pork broth.

Living in 11 cities in the span of 12 years, Chris Corlett started his count in Minneapolis. Now, opening Rah’Mn, he’s come full circle back to Minnesota to bring something he thought was lacking: ramen.

“I grew up here in Minneapolis actually,” Corlett said. “I started my career when I was 12 years old.”

His first foray into the culinary arts came working as a young teen at a country club in Prior Lake where he found his artistic personality lended itself to hospitality and food.

“I was always artistic. I liked taking care of people, making people happy,” he said. “I quickly figured out food is a good way to do that; wine doesn’t hurt either.”

To continue his journey into the world of food, Corlett headed to New York to study at the Culinary Institute of America. From there, with a period in-between back home, he continued to San Diego where he learned more about Japanese-Asian fusion.

For the next seven years, Corlett lived and worked in California, but then he decided there was something more he wanted to do.

“I have always chased experience, passion, learning, growing; always over salary,” he said. “I decided to move back from California to embark on this adventure that is ramen.”

That’s when Rah’Mn came to be, but not before intense renovations on the physical space. The restaurant itself features reclaimed wood tables and seats with wicker lighting as well as a bright, tiled red wall behind the kitchen, but when the process started there was a dirt floor, walls and windows with nothing else.

“It was a complete shell; we did everything,” Corlett said.

The process from renovation to opening took six months before people were invited inside to try their food.

The response opening weekend was overwhelming. In the first weekend, 2,000 people came, so many that the line wrapped around the block numerous times. The kitchen ran out of noodles and bowls alike. At times, the restaurant had to shut down to re-prepare the menu.

With so many people and some hiccups, the reviews that began to show up on online review sites like Yelp were not entirely positive.

“It was really humbling,” Corlett said.

Afterwards, he began addressing each of the concerns raised in feedback. From pricing to condiments to bowl ingredients, responses led to changes.

“I had to do a better job,” Corlett said. “We’re growing every day [and] success is making sure our guests are as happy as possible.”

They’re striving for that success by responding to feedback and offering high quality ingredients.

The restaurant has no freezer; everything inside is fresh. The vegetables are washed and cut by hand while the protein includes free-range eggs and Duroc pork from Compart Farms in Nicollet.

“We want to provide a great value, more than quantity, quality,” Corlett said.

Corlett wants to see people take control of their food and to be creative.

For his own bowl, Corlett often includes arugula for a peppery flavor, corn for a balancing sweetness, carrots for color and garlic butter for a base of flavor, but he stresses the best way to get a good bowl is to put whatever you want inside. At the end of the trip, Corlett just wants to see people leave happy. If there was a snag along the way, he wants to fix it.

“The service is more important than the food.”

Even with an arguably rocky start, that attitude has Rah’Mn already making changes within two weeks to respond to the feedback and to continue improving so that next winter we have something different to warm our cold Minnesotan hearts: ramen.