Out of the box, out of this world

Impaler, Galactic Empire and Mac Sabbath combine to make the weirdest show of the year. 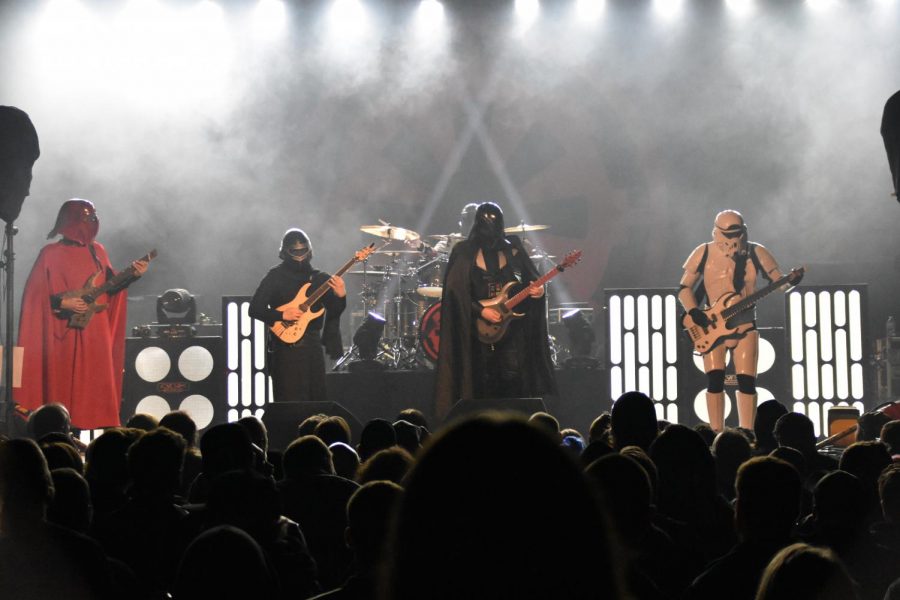 The show started with a bang and, maybe, an ooze when Impaler took the stage with lots of energy for their home state right up to the moment they pulled one of their members’ guts out, one long intestine after the other.

Fake blood tidied, Impaler left the stage for Dark Vader to enter, bringing with him the remaining band members Boba Sett, Bass Commander, Shadow Ranger and Red Guard, whose intergalactic set list is coupled with a laser light show behind them.

The imperial interlude led to Mac Sabbath, a band who also dons costumes of inspired characters, though they are starkly more earthly: Ronald Osbourne, Slayer MacCheeze, Grimalice and the Catburglar, with their inspiration coming from the fast food industry.

While now, coming off a sold out show in Chicago, the band covering a nerdy soundtrack on tour seems entirely plausible, the plan had never been to take Star Wars covers to a stage, as Galactic Empire has.  A viral cover video in 2015, done mostly because they thought the idea of taking John Williams’ score from orchestral to metal was hilarious, that yielded a reception more impactful than anticipated.

Kelly didn’t know that video would lead to their first live show, which was on national television in response to their sudden popularity.

“I assumed that would kind of be it,” Kelly said.

Instead, the band has grown from a single video of the Star Wars Main Theme to an entire album encompassing many of Williams’ iconic pieces.

“It was a weird, blurry ride,” Kelly said.

That description isn’t unlike the experience of an audience member either. Many crowds for their four previous shows on the “I Got a Bad Feeling About This” tour held some confusion about what to expect, but that was part of the fun .

Some of the confusion is on stage too, though it would be better described as disorientation. As the band performs in costume, the act of playing an instrument is monumentally harder.

“If you can figure out how to see your instrument, that’s one hurdle.”

The next would be figuring out how to maneuver around stage with no peripheral vision, while playing an instrument.

That element hasn’t always been successful.

At a previous concert in Houston, Texas, Red Guard, in a encore finale, hopped off the stage from a drum riser, only to realize midway through the air that Dark Vader was right in front of him. Rather than crash, he landed and threw himself to the floor in a sudden transition to Angus Young, spinning on the floor with “bare, white legs flailing around” beneath the layers of his cloak, according to Kelly.

Balancing out their lack of motion on stage, Galactic Empire introduced for this tour the addition of a light show behind them, run through a computer program produced by drummer Grand McFarland and bassist Carson Slovak.

With First Avenue’s sticky floors vibrating underfoot, ears already ringing, and lights shooting out across the pit the night was, as Vader said on stage, “the weirdest show you’ll see all year.”