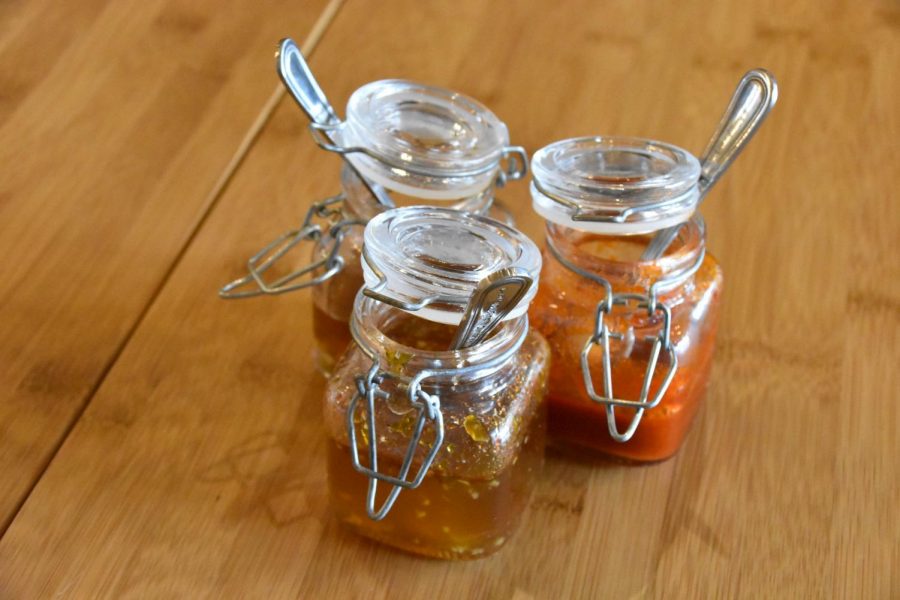 Glass jars of sauces sit atop every table.

Inventive, inspired flavors like Vietnamese Coffee and Matcha alongside more classic Chocolate are some of the possibilities for the upcoming addition of ice cream to Sweet Chow’s offerings in the Minneapolis North Loop area.

Chef John Krattenmaker, known for his food at the American Swedish Institute’s FIKA and Cafe Alma, ensures that the fun flavors will be balanced with some more familiar ones.

“Cookie Dough Ice Cream is the best ice cream,” Krattenmaker said with a promise that it’d be one of the six to ten flavors they plan to add.

The edition of the sweet part of Sweet Chow is set for this spring for as soon as they can following their opening of the restaurant on February 22. The concept for the modern, counter-service Asian food was a bike trip by the three owners Julie Hartley, Greg Cummings and Ami Francis following a bike trip around Southeast Asia.

The cuisine currently featuring on the menu is largely inspired by the foods of Thailand, Vietnam, Cambodia and South Korea though the future may hold more variety of the region’s foods.

“We’re trying not to tie ourselves down,” Krattenmaker said.

If future inspiration strikes, the menu at Sweet Chow will flex to fit.

For now, the menu features a very pescatarian-friendly menu with a lot of prepared sauces especially fish sauce, a fermented anchovy sauce with a strong umami flavor commonly present in the traditional regional cuisine.

Aromatic spices, especially thai chili, and kimchi are other hallmarks of the foods Sweet Chow is drawn from though those at the establishment stress they are not ‘asian fusion’ but a traditional take of Asian cuisine with a slight Midwestern twist.

The major difference of Chef Krattenmaker’s interpretations are the techniques used to prepare the dishes that may not be the typical style of preparation, but are styles from other parts of the world or the chef’s other training that give the typical recipe something new and elevating.

Much of the cooking they do at Sweet Chow, to keep everything within the vein of their fast casual style, is in the preparation.

“The magic is in the prep work,” Krattenmaker said.

Those big flavors were something missing from the North Loop.

“I would say people are excited to have something new,” Rose said. “We kinda fill a niche.”

Soon, the next new thing will be their ice cream– which there can never be too much of.