Seven-year-old budding floral artist works alongside her mom to join MIA’s annual event with her own floral interpretation. 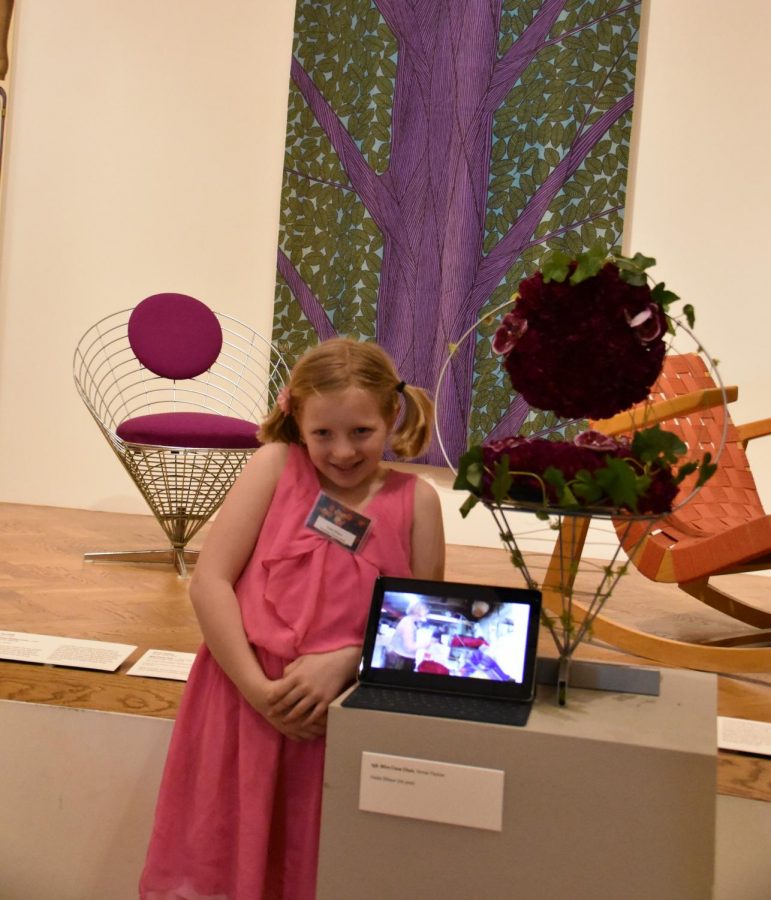 Violet Wilson stands beside her finished piece and the chair that inspired it, showing off the timelapse to prove she did it all by herself.

“You can make something shorter, you can’t make it longer…” Side-by-side, mother Britta Wilson and daughter Violet Wilson work on each of their respective pieces for the Minnesota Institute of Art’s Art in Bloom event the night before set up.

Seven-year-old Violet stands on tiptoes atop a milk crate, raising her high enough to add carnations to the floral foam to build the seat of the Wire Cone chair she is replicating from Verner Panton of Denmark while her mother works at another surface bending large leaves to create the shawl piece in her interpretation of “An Inner Dialogue with Frida Kahlo” by Yasumasa Morimura.

Already, they have each spent around five hours, but the night is young and another five or six go into them before they are ready to be assembled for the MIA’s annual event that ran from Thursday, Apr. 26, through the weekend.

The event is a tradition in which floral artists and enthusiasts interpret art in fresh floral pieces that are displayed for four days.

This year, the 35th its been done, marks Britta’s sixth year participating and Violet’s first following in her mother’s footsteps, but she’s been going to the event since she was a baby.

“I really love the flowers,” Violet said, “and mother’s been doing it.”

She prepared to pull the design off on her own with practice carnations and floral foam leading up to the real thing, and for a seven year old, her mom marks her skill as impressive. Violet attributed her ability to more than practice, but to having “a great florist as a mom.”

Britta’s piece spoke to her in large part due to the logistics of needing something close to Violet’s gallery for the opening night when they stood by and presented their pieces, but also Kahlo herself.

“I don’t know, I just like her, she’s wearing a thorn necklace!”

Initially, she sketched out a long design, but quickly moved to something spanning two containers: one to house the backdrop and another to represent Kahlo herself. Working quite literally, which tends to be her style, she recreated the elements she identified from the floral backing in the artwork.

“I knew right away I could recreate it,” Britta said.

Early Tuesday night, the backdrop is mostly complete and the floral interpretation of Kahlo’s form slowly took shape with curving Croatian leaves for the curve of her shoulders before an iron rod made by Jason Wilson, her husband, who also helped Violet build the iron base for her chair, is added to the center.

Using a melted adhesive, Britta shaped floral foam around the top bar to build the head dress shape on, giving it height over the body of the piece with suspended hyacinth blooms. The necklace waited till later in the evening to be added to the bar and decorated with rose thorns.

At each step, there’s trial and revaluation.

The process is one of rough planning and gut-trusting, but step by step their pieces moved along until Wednesday when they were moved to their pedestals in the museum, preparing for their unveiling Thursday night for the Flowers After Hours opening.

After set-up, standing beside the painting itself, Britta found the overall look too dark.

“That painting isn’t that dark,” she said. “So I added some yellows. I’m pleased with it.”

Next year, perhaps the scene will repeat of mother and daughter working side by side over hunks of deep green floral foam, but Violet will not need a milk crate to reach the surface anymore because after all kids grow like weeds, or maybe, like violets.