Petting zoo out, therapy dogs in 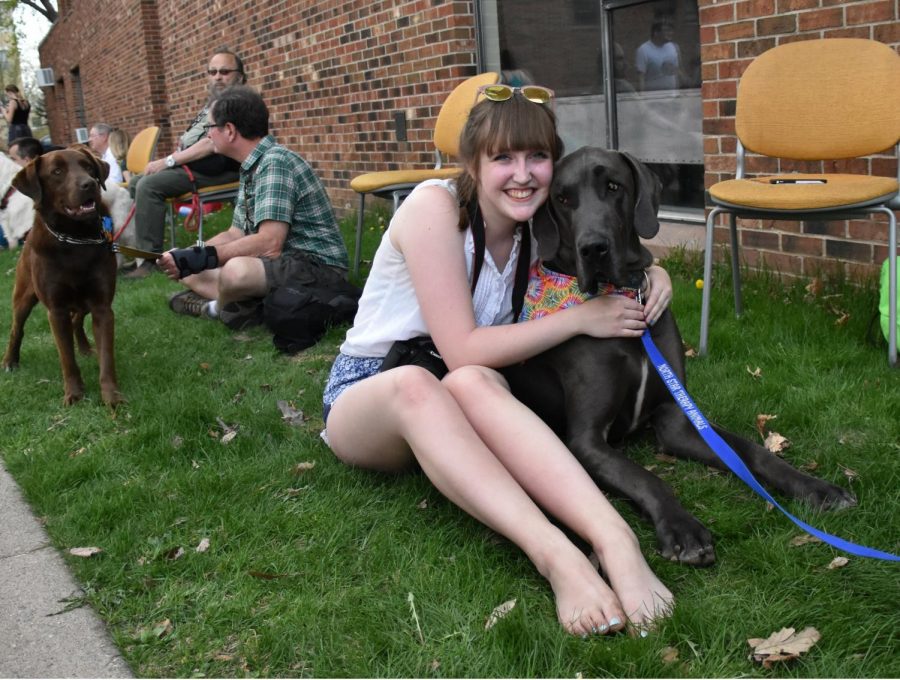 Bean bags whizzed through the air, smoke carried the smell of bbqing up towards the open windows in the Heights and students donned sunglasses and lounged in the grass. The Grill Out, Chill Out event on Saturday May 5 in the Height’s quad was in full swing, but it was missing the advertised petting zoo.

On May 1, Five days before the event was set to occur, Nancy Klein Administrative Assistant for Residential Life emailed out the change to students.

“After a few students raised some concerns and discussions with the administration, it was decided that it was the best to cancel the petting zoo for this year. However, we will be having a few therapy animals take their place,” Klein said.

However, that decision was not made by Residential Life, according to her response when asked about the change.

“Our office was asked to send out the notification, but received no other information.”

However, she was not acting for the club, but on behalf of herself.

“It was representative of me,” Badger said through email. “Most of the members of the club didn’t know about the event, we never discussed it as a group”

Badger reached out to first-year Mary Wiertelak, Drew Hall Council’s Historian, who was in charge of the event.

“We were contacted directly by one student and they mentioned in their email that the students they had talked with were concerned and opposed the idea of the petting zoo being brought to campus,” Wiertelak said.

Badger confirmed that she spoke with around five other students who were opposed.

“I have years of experience in animal rights, and I have explored all sides of the argument for and against it,” Badger said, in her email to Wiertelak.. “The research and experience I have has led me (along with many others) to the conclusion that the use of animals is  inherently unethical as they are simply not here as a resource for humans.”

Badger expressed in her email that the environment of the Grill Out, Chill Out event could be negative for the animals.

“The animals being brought to campus- chickens, rabbits and sheep- are prey animals and experience stress and discomfort around large groups of humans. These animals are very shy at the farmed animal sanctuaries I volunteer at, and they take a very long time to warm up to people. An excellent environment to connect with animals would be an animal sanctuary in which their interests are represented and people are visiting their home, rather than transporting them to unfamiliar places so people can poke and gawk at them.”

She also expressed concern in her email that animals were being served as food alongside the petting zoo activity.

Due to emotional distress for the animals and distraction from upcoming finals, she asked them to reconsider the exhibition of a petting zoo.

Wiertelak, following the emails, reached out to the RHA’s advisor Gaith Hijazin as the event is collaboratively being organized. Together, those involved and administration called off the petting zoo, though Hijazin suggested the alternative of therapy animals as they have training to be around groups of people in comparison to the petting zoo animals.

“We all agreed that it was important that student money was being used to put on events that the students actually wanted and would be able to enjoy,” Wiertelak said. “After the concerns were raised we wondered how many students would enjoy the petting zoo.”

The response to the change is mixed. Of those vocal, some are concerned that ResLife changed an event to what appears to be a very small amount of public complaint and protest from a portion of the student body and others are pleased that administration was receptive.

“I love dogs,” first-year Andrew Weston said. “I’m happy to see dogs, but I also love pettings zoos. I was not as enthused about the dogs as the sheep… I wanted a sheep to be here, but overall [it’s] a really good event. I love it.”

Some are pleased that concern, in general, brought change.

“I think it’s a really good change,” sophomore Elli Vega said. “I wasn’t in contact with the people running the event, but it seems like they were really receptive about people’s concerns.”

Though she was not involved in the original complaint, Vega did not like the idea of the petting zoo.

“The idea of a bbq and a petting zoo together seems strange and a little cruel.”

Ultimately, the goal of the event, whether with a petting zoo or therapy dogs, was to provide a fun de-stressing opportunity leading up to finals.

“I think that the students in both RHA and HARC handled the situation very well,” Mark Berkson, Faculty Advisor to Hamline Animal Rights Club, said. “Everyone’s intentions were good, and people with different perspectives communicated in a thoughtful, respectful way… Ultimately, the event organized made the decision to substitute therapy dogs for the petting zoo… I think that having therapy dogs is a great idea. What better way to get rid of stress than hanging with affectionate dogs?”

The event featured more dogs than students typically see in Bush Library during finals with over five furry faces lounging in the grass amongst the smell of grilling burgers and the noise of lawn games.

According to Berkson, HARC is organizing a group trip to an animal sanctuary in the future to provide students a look at different species in the animal’s territory, so while this semester just held dogs, perhaps the future will hold more.