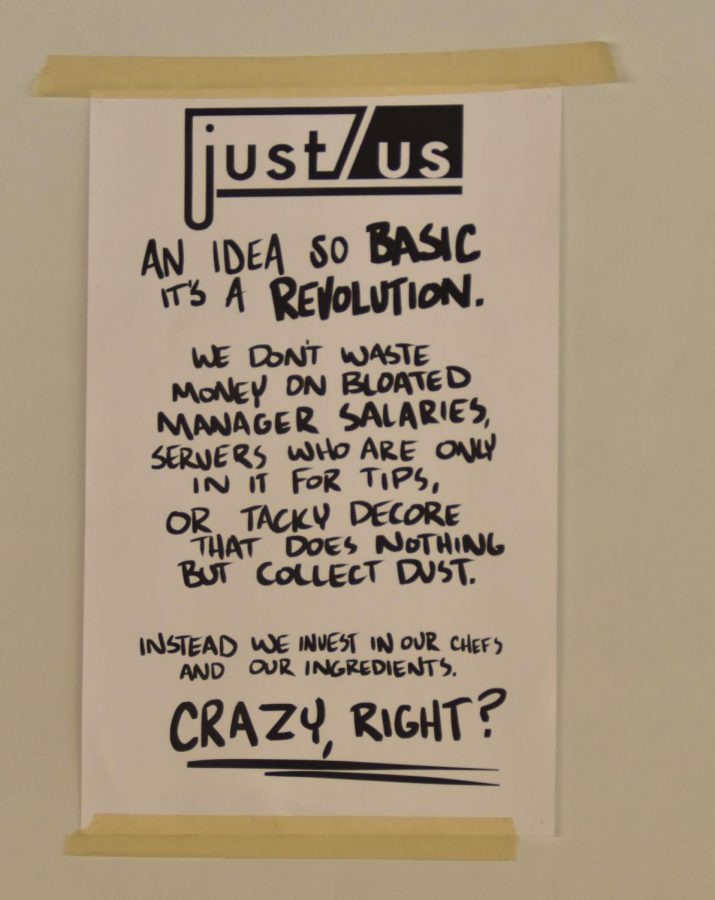 Unassuming and simplistic, the space for just/us, a new addition to downtown Saint Paul, is in perfect opposition to the food they serve.

Nate Docken, the self-titled Dungeon Master of the new restaurant, said the idea stemmed out of realizing the major flaws of the current restaurant industry.

“I was noticing how awful an industry it is,” he said.

Yet, as a chef for ten years who attended the Saint Paul College of Culinary Arts right out of high school, Docken didn’t want to leave the industry. He described it as though he never had a choice to do another but cook.

“My mom’s italian, so it was either that or join the mafia,” he said.

Yet, when the smallest problem a kitchen can have is a chef who loses his temper and yells, the biggest can be sexism, racism, or sexual harassment and a wage gap between front and back of house is a given, he wanted a change.

“We’re trying to be part of the solution, not the problem.”

Their part in that solution is a restaurant run by a small team of chefs with no additional staff like servers. The entire experience from prep to table is done by the team of cooks. They have an illustrator who does their social media management Mona Negasi, a dishwasher, and a helper in the front of house, but otherwise Docken works alongside two other chefs: Samantha Roiland and Jesse Chil.

The restaurant occupies a corner space on Wabasha and 7th downtown where they’re serving a rotating, six course tasting menu in the evenings and a small, flavor-packed burger menu during the day.

Then, once the food is made, it’s served by the chefs behind it giving everyone the personalized experience of meeting the one behind their food.

“People really like that they get a face-to-face relationship,” Docken said.

Their menu, that changes every three weeks, is a study in themed food for each of the chefs. Once a theme is set, sometimes as simple as their current menu “vegetarian” and sometimes as challenging as “anti-valentine’s day” or a study in “all black food,” all three minds break and create their own pieces of the testing menu separately working from three different influences from simple East African flavors to experimental Mediterranean ingredients.

Then, that menu is served prix-fixe from $45 per person in an experience that requires a bit of trust for those in the kitchen.

“You have to be willing to go a bit out of your comfort zone, but more often than not, it’ll be good,” Docken said.

Otherwise, when they aren’t making things like carrots with a pomme souffle and blue cheese mousse, they are slinging burgers that are more than just your bacon, lettuce, and tomato.

“We are passive aggressively trying to be the best burger joint,” Docken said.

Their burgers look anything other than passive though with combinations like dark chocolate sauce and chicharrones or almond butter with brie cheese, but for those with more basic tastes they have some classic combinations too.

Either way, for tasting menu or a lunch time patty stack, just/us is trying new things, which is usually reserved for the Minneapolis side of the river, and their passive aggression and gumption fits right in here.