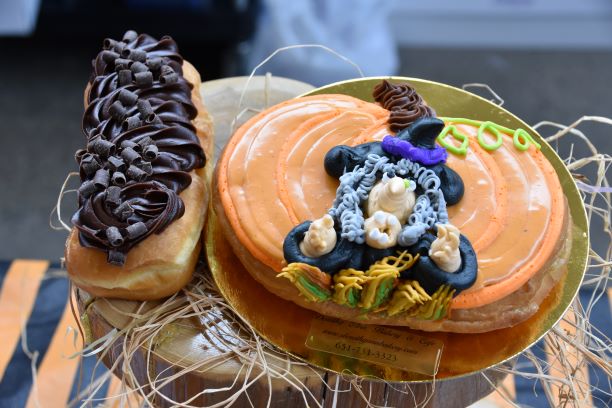 Powdered sugar explosions and sprinkles flying in every direction is how I pictured a donut brawl, but the first ever Twin Cities Donut Brawl event at Parallel Coffee’s Holden Room event space in Sunday Sept. 30 was nothing like that.

Instead it was a bright, noisy room with natural sunlight on a otherwise dreary day illuminating tables upon tables of donuts topped with circus crackers, mini marshmallows, candied lemon peels and more.

Running from 11 to 2 in the afternoon, the event saw a quick rush when it started and lulled towards one as the sugar coma began to set over the tasters.

For participating bakers, it was an opportunity for experimentation and exposure to some dedicated donut lovers who paid $25 for admission in for sampling’s of 11 different bakeries’ offerings. For those who came, it was a time of conversation, bloating, and prime Instagram photography.

For the hosts and organizers of the event, Zach Vraa and Alex Lodner the event was born because they couldn’t find anything like it already.

Their purpose in hosting the event was to feature some of the many, amazing options for Twin Cities pastries.

“Our ultimate goal is to promote the vendors,” Lodner said. “There’s just really amazing stuff out there.”

For those who attended, they just wanted everyone to enjoy it.

Besides promotion and fun, the event wanted to do some good by donating proceeds from ticket sales to Second Harvest Heartland.

At the end of it all, as the name suggests, there was some competition. A panel of judges voted their choices for best classic and showstopper donuts as did all the attendees.

The panel of judges Chef John Kraus of Patisserie 46, Brent Barkey of Cities 97.1, and Falen and Jake of The Instagram account @mouthmeetmpls voted to crown Cardigan Donuts with best classic for their old-fashioned and Valley Pastries for top showstopper for their Caramel Apple giant donut hole.

“We’re all about the dough,” Mike Getty, co-owner of Valley Pastries, said.

The people’s choice awards went to Bakery Box for the classic choice and Valley’s Pastries took the second showstopper award.

Those that didn’t win any titles still brought fascinating donuts to the table. Angel Food Bakery has fun with their showstopper, exclusive to the event.

Their donut featured a savory and sweet blend inspired by Chicago popcorn blends with cheddar cheese and caramel. The pastry cream filling was infused with that salty snack while a handmade animal cracker topped off the sprinkled donut.

“It’s not competitive, it’s so cool to see what everyone is doing.”

Even for those that did not win, the event was good.

“Good publicity no matter what,” Natalie Everhart of The Grind said.

As everyone left the event, groaning, talking of treadmills, and carting inventive stacks of donut pieces, it seemed clear that this event was a sugary success.