Get chills without getting spooked

5,000 pumpkins light up the woods of the Minnesota Zoo in a breathtaking display. 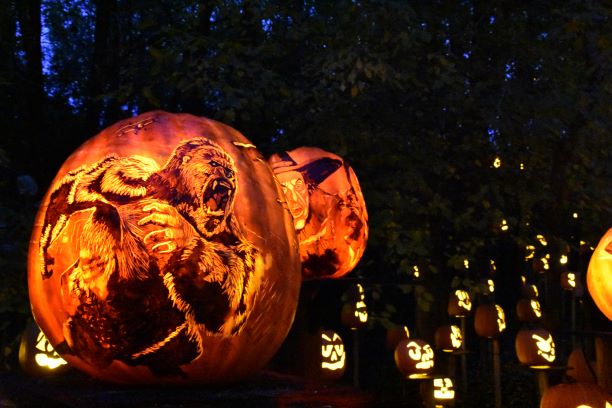 Intricate lines carved into a hefty pumpkin capture a Kong in motion.

Darkness descends over the pathway and trees hang overhead, broken up by the bright orange glow hanging from their branches. Fog rolls over the pavement of the path, and within the dark night, a giant pumpkin stands as the centerpiece to hundreds of smaller carvings clustered around on all sides, illuminating the crisp, October night; it is the first night of the Jack-O-Lantern Spectacular at the Minnesota Zoo.

The partnership between Passion for Pumpkins, the carving crew behind the display, and the Minnesota Zoo was based on the urge to host an event outside of the summer months that featured the grounds of the zoo, something different than their usual focus on their key passion: the animals.

The 5,000 pumpkin display is an illuminated, walk-through art experience titled “A Walk Through Time.”

“It is an organic art gallery,” Travis Reckner, co-owner of Passion for Pumpkins, said.

Because they are creating on such a canvas, the show has to be refreshed constantly throughout the October-long run, so a 5,000 pumpkin display will actually use 20,000 by the time the show ends Oct. 31.

Throughout the show, as the time-based theme steps from the era of the dinosaurs through to the decades of the 1900’s, intricate, larger carvings replicate famous paintings and photographs of their era.

Each of these pieces takes four to five hours to draw before another three to four is spent on carving which means throughout the show, as the heat and rain degrade the pumpkins, they have to be re-made.

“Somebody is doing something on a pumpkin all the time,” Reckner said.

For the month of October, Passion for Pumpkins thirty to thirty-five artists are working around the clock, often while juggling other jobs and squeezing their carves in between shifts.

For father-son team, this year marks the 30th anniversary of Passion for Pumpkins.

“We’re bringing a little bit of New England to Minnesota,” John said, describing the illuminated, hillside display of carved jack-o-lanterns that was their first show in 1988.

Then, after the rush, the month will fly by and the pumpkin frenzy will fade.

To see the show before that season ends, find an evening you are free for a 45 minute stroll and head to the zoo. To those who attended the first night, it was worth the price tag.

Ticket prices range from $12 to $18 depending on age and the day. Friday and Saturday tickets, as they are the busier, prime nights, cost a bit more. Full information can be found at http://mnzoo.org/jols/.