A compassionate and tasty guide 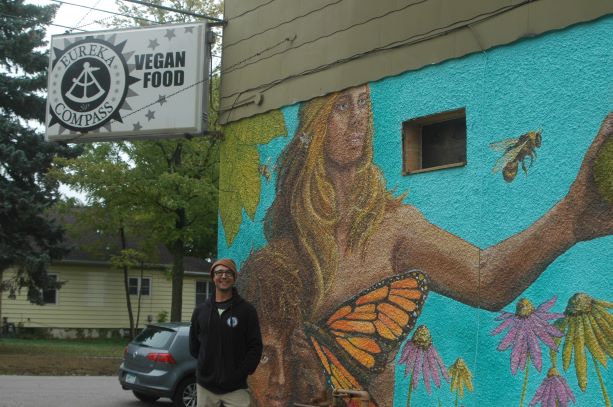 Owner Colin Anderson started up the Eureka Compass bodega in May 2017.

Just an A Line trip or short walk from Hamline’s campus, Eureka Compass Vegan Food greets its customers with a straightforward mission: to educate the community on how veganism can promote a healthier lifestyle and be delicious while doing so.

“Here in the Twin Cities, in the heart of the bread basket of all the world and everything that’s available, there’s no necessity to eating meat and to supporting these entirely destructive environmental systems,” owner Colin Anderson said.

A vegetarian since 2000 and a vegan since 2008, Anderson has lived his life as a strong advocate for environmental conservation. This became intertwined with his passion for cooking, which has existed since childhood thanks to his family’s culinary background.

Following a vegan food tour of various American restaurants, Anderson began to wonder why he could not follow a similar path himself. His mission found its roots in his own home, the Twin Cities.

“Having lived in this community now for eleven years, I wanted this to be offered here,” Anderson said.

The local feeling rings true immediately upon entrance. Not only is the food made from scratch, but the featured art and music is often a product of other creators in the cities.

The business now runs as a collaborative project between Anderson and Ryan Strandjord. The two work together to create original recipes, host events and encourage discussion. The values they promote are easily seen in the business name itself.

There is no reason to be intimidated if you are not vegan or questioning a lifestyle change. The shop is welcoming and the amicable staff only wish to educate and inspire customers to begin thinking about what they are consuming.

“Veganism is this utopian concept in a tirelessly dystopian world. This has got to be that resource of educating and empowering people to just, y’know, take it into their own hands to truly create the world that they want, to think about every dang thing that you’re doing,” Anderson said.

Their goal is not just to help our environment but to help its inhabitants by providing food that tastes great and feels good for the body. The team is frequently coming up with new ideas, which creates a weekly rotating menu. The options are constantly changing, so there is always a reason to come back and see the variety of choices veganism can create.

The hope now is that this message will begin to reach the younger community. Even with proximity to Hamline’s campus, Eureka is making efforts in expanding business to students.

“Hearing the Chef discuss his vision of the future of Eureka and the Hamline-Midway area was inspiring. Colin won’t be satisfied by running a successful restaurant. His vision is much bigger and much more communal,” frequent customer Dane Edward Miller said.

The company has grown a strong social media presence, residing both on Facebook and Instagram. Instagram users can follow @eureka_compass_vegan_food to find various opportunities for cheap and delicious food, sometimes as low as a dollar for a meal.

“I do think that for college students that are looking for something, that it’s truly a new experience, a unique experience everytime you come in here,” Anderson said.