Newly released film raises questions about the privacy of politics. 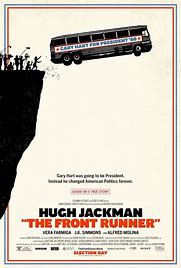 The official poster for the movie The Front Runner, releasing in theaters Nov. 21.

The story of Gary Hart, a 1988 Democratic presidential nomination, might not be a well-known one to those currently on campus who were born after his campaign even came to a close; however the questions raised in the docu-drama that Sony Pictures are releasing everywhere on Nov. 21 are applicable to everyone in the modern age of constant media coverage and hotly contested political options.

Hugh Jackman plays the key role of Gay Hart in Jason Reitman’s film as it follows the rise and fall of Hart in the three weeks leading up to the election when he shifted from being the front runner for the election to a drop-out because of intense media coverage and scrutiny about his relationship with model Donna Rice. For the first time in political coverage, a candidate was asked point blank about the contents of his sex life and whether he was an adulterer.

The more commonly known story of Bill Clinton’s affair comes to mind on this topic, but that scandal came later in 1993. Hart’s story is really the one that saw the turning point of tabloid-like media coverage of political news.

The film is based on the book “All the Truth is Out” by Matt Bai which came out in 2015, but sales did not amount to as high as expected, as reported in The New Yorker. I anticipate that with Jackman’s transformative performance as Gary Hart, the story now has the potential to grip more viewers than it did readers.

Jackman’s performance is gripping and emotional, and the film itself is sharp and witty. Several moments had even my father chuckling, which is a rare and wondrous sound that usually only escapes when watching the not-guilty-enough favorite of his, Rat Race. However, the snappy comedy of J. K. Simmons in particular is fabulous in the film with a deadpan seriousness that makes the laughter come even harder.

So far, the film has received middle of the range feedback. Rotten Tomatoes has it sitting at a solid 60 percent, claiming that it does not fully examine the questions raised. That is not wrong. However, students , especially those interested in journalism, politics or media as a whole have a potential here to analyze an interesting moment in history encapsulated in a piece of pop-culture.

I think the film does leave a lot on the table that could have been hashed out, but for an astute viewer, it is our job to do the thinking about the screen’s gone black. What right does the public have to know about potential presidents? What is the line for journalism in discovering the meat of a story? How will it impact us if our urge to know every detail of candidates lives scares people away from running for president at all?

The film isn’t going to respond to these questions, but with a firm punch of humor and sharp acting, it’s an enjoyable journey to the questions. I’d recommend planning dessert for after the film to work towards some answers though, otherwise those questions just hang in the darkness of a closed theater to go unanswered until another film.