Confusion about Hamline's campus closing leads to a bigger question: how does essential knowledge get dispersed at Hamline? 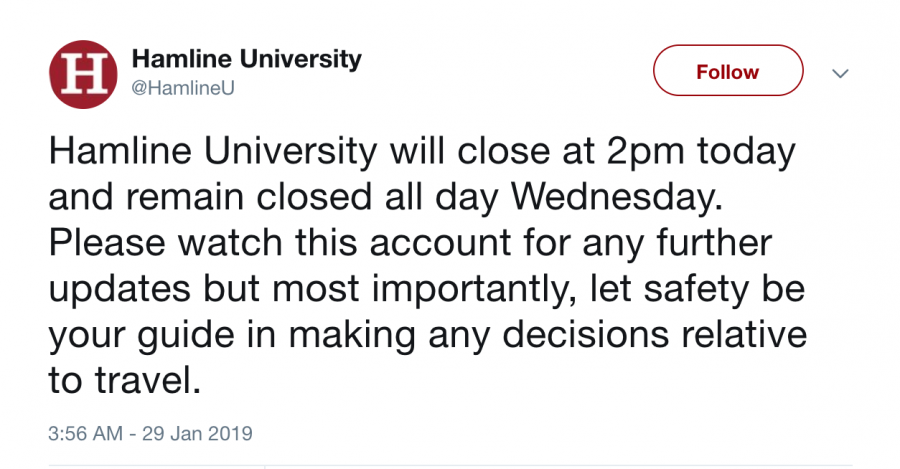 “We knew, without the shadow of a doubt, that the windchill on Thursday morning would be 25 to 30 degrees below zero, and we have more students who live off campus than who live on campus,” Embser-Herbert said.

They were one of the commenters on Hamline University’s Facebook post announcing the close criticizing the administration for the late notice and how that notice was given.

“To those of us on the receiving end, it didn’t make any sense,” Embser-Herbert said.

“It’s the start of classes, we have students coming, we have orientation, we have families on campus, we have food needs we need to meet for students, and these are all logistical questions,” Papas said. “We had a lot of moving parts that really affected us that didn’t really affect other schools.”

While Papas admitted the timeliness of the closing announcement was not optimal, he cited a number of things the institution and President Miller had to weigh as a reason for their decision of when to close and when they would make an announcement.

“What we tell people is that they can always make decisions that affect their own personal safety without us having to intervene,” Papas said.

“There should be various methods of communicating with the students. That way more people can see it,” Morales-Balbuena said.

Sophomore Lily Yang showed up to class on Wednesday without knowing campus was closed.

“I didn’t check my e-mail, so that was kind of my fault,” Yang said.

Students are able to receive text notifications about campus closings, but they have to go to Piperline to activate the text service.

“A social media account should not be the primary mode of communication for an elite institution,” Durand said. “If classes are canceled or there is important information that all students need to know, it should be sent out by text or email.”