Students and faculty scramble to stay on schedule after heavy snowfall and canceled classes throughout February. 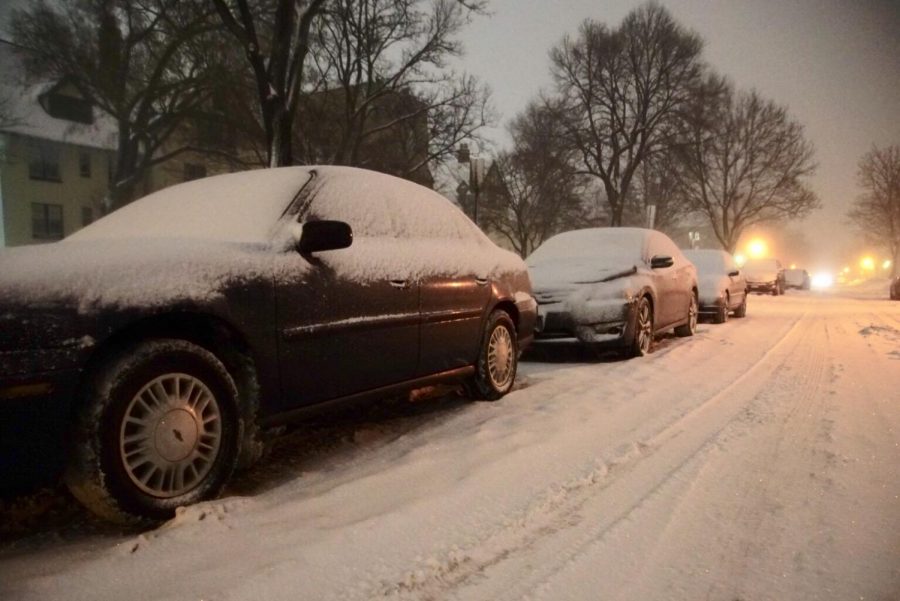 A few inches of snowfall on Saturday night, February 23, leaves a lot of work for the next semester.

Freezing temps and record snowfalls at the beginning of the spring semester caused a campus closure, a delayed opening and numerous class cancellations, all within the first four weeks of class.

This month, the metro area received a record 39 inches of snow, as measured by the Minneapolis-St. Paul International Airport, breaking the previous record for snowfall in February of 25.6 inches set in 1962. These disruptions, coming so early in the semester, have forced faculty and students alike to scramble to keep up and stay on track for the year.

Campus closures and canceled classes are particularly problematic for faculty teaching labs. Kathy Burleson, a senior lecturer in biology, said this was one of her primary worries during the first weeks of the semester.

“I was really worried that if one section got canceled for weather, how that would impact the whole rest of the semester because I can’t have lab sections be off schedule,” Burleson said. “What’s complicated about this was it’s the first week… If I built in any leeway into my lecture time to cover material, I’ve lost that.”

She was able to shuffle her lecture and lab schedule to accommodate changes and moved exams back to allow more time for catching up when snow and cold temperatures prevented a significant number of her students from coming to class.

“Some students missed several classes in one week,” Burleson said.

Sophomore Ted Korby missed a physics lab after road conditions kept him from making the 45-minute commute from Forest Lake. His absences are not hurting his grades, but he says making up the missed lab work is challenging for himself and classmates in similar situations.

“We’re not really behind, but we’re struggling to catch up,” Korby said.

English professor Kris Deffenbacher has canceled at least one day of each of her three classes, including the first two weeks of a night class. She said she and her students have been able to stay on track with the syllabus by doing online work in place of missed lectures.

However, she also offered online alternatives on bad weather days when the class was not canceled. These were positively received by students who would have driven in hazardous conditions otherwise.

“I think a lot of students feel compelled to come if there is class and if there is no alternative online,” Deffenbacher said, although she noted that online alternatives would not work for all classes.

First-year Jailyn Robinson said she enjoyed the extra days off even though the tradeoff in homework has been demanding.

“It’s like a give-and-take,” Robinson said. “Everything feels a little rushed and everything gets pushed back.”

Although faculty have canceled individual classes, Hamline has stayed open through the heavy February snow.

According to Hamline policy, Provost John Matachek is responsible for making the final call of whether or not to close campus, but other members of administration weigh in, including President Fayneese Miller, Dean of Students Patti Klein, Director of Communications Jeff Papas, Director of Public Safety Melinda Heikkinen and Associate Vice President of Facilities Services Lowell Bromander.

Hamline releases notifications of campus closings by 6 a.m. through posts on Twitter as well as through the Hamline Alert system, which sends students an email. Students can sign up for text or phone call notifications from Hamline Alert by going to their Personal Information tab in Piperline.