All because of a doughnut

How one frustrated employee became their own boss. 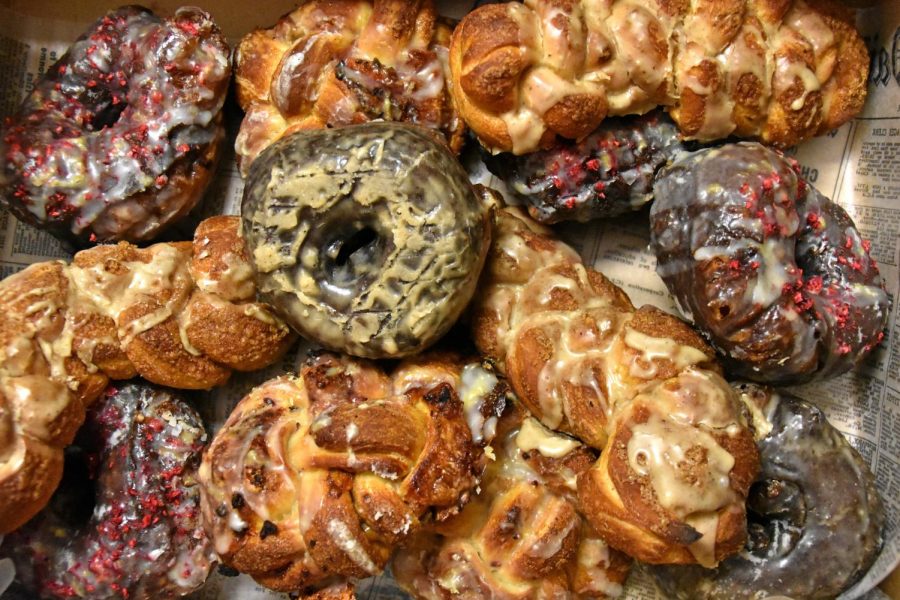 Experimental doughnuts in flavors and shape clutter the counters and boxes of the kitchen with flavors from the class brown butter to the first test of a tangle brie-raspberry bun.

A pan of oil sizzles and burbles on a stove top beneath a red peg wall covered in more pans, all worn with use and time. To the side, hovering within the spray of errant droplets of fry, an arm extends with a single chopstick to carefully scoop and flip the browning ring of dough in the hot pot. With the motion, a single earring in the shape of a sprinkled, pink donut swings in Abby Kastrul’s ear as their voice, laughter and narrative blending, overpower the sounds from the stove as they explain how Bakery Box, their business, came to happen.

However, Bakery Box took off when they started selling 200-300 doughnuts every weekend. The doughnuts weren’t the start of their baking though.

“As a tiny toddler, I’d come home, ‘Okay dad! I wanna make this and I made the recipe,’” Kastrul recalled.

In retrospect, they don’t know how their parents put up with all the unsavory recipes dreamed up by a four-year-old, but Kastrul never feared trying what they wanted.

“I was really lucky I could experiment,” they said.

Few of these trials amounted to culinary success until age 15 when Kastrul’s savory style evolved, but still pastry wasn’t their preference. Later on, Kastrul continued this affinity for food by working in the restaurant industry, but primarily in the front of house— much to their displeasure.

Many of the experiences working for others were not positive.

“I had been working at restaurants for five to six years [when] I realized the toxicity of the service industry was taking a toll on my mental health,” Kastrul said. “[I realized] there’s nothing I can do working for someone else that will make me as happy as working for myself.”

Then, baking became a business. In 2017, still supplying their key income from hired work, the Bakery Box business launched, focusing primarily on customized cakes. It wasn’t until late 2018, attempting to make the Hanukkah tradition Sufganiyot, that Kastrul experimented with doughnuts.

“Then, I thought about cronuts.”

Ignoring the fact that they’d never had a cronut, Kastrul started experimenting, frying croissants with imperfect results. In a random spurt of inspiration, their love of brioche inspired a new attempt, a bready, laminated approach that produced the first iteration of the current recipe.

Since then, the recipe has been evolving, little by little, but the core is the same. They are a laminated sourdough with a dark crust and a chewy texture.

“The doughnuts were the catalyst.”

Since rolling out doughnuts, Kastrul supports themselves now with Bakery Box’s income alone and has been in the process of moving to a commercial kitchen space since January of this year. Their goal of working for themselves has found success. They accredit it to the doughnuts.

The doughnuts are surprisingly different compared to the usual light, airy doughnuts that populate old standby institutions. Yet, one of the most rewarding moments is at markets, watching customers circle back, mouth half-full of doughnut to say, “Oh, my, god!”

“At the end of the day, my cheeks hurt,” Kastrul said.

Not yet moved to a bigger, commercial space, Kastrul is still bumping into cooling racks and spilling glaze off the whisk onto their shirt as they develop a lemon glaze recipe to top with freeze-dried raspberries. The new flavor will go live for pre-order, most likely, for the third weekend of March, but Kastrul doesn’t usually plan too specifically.

“So far, I’m two years into this whim— and it’s going well,” they said.

Customers, who sell out the 300 doughnut limit each weekend, would agree.

For anyone wanting to snag an order of doughnuts themselves, order information is on the Bakery Box website: bakeryboxmpls.com/doughnuts/.