The horror within “Us” 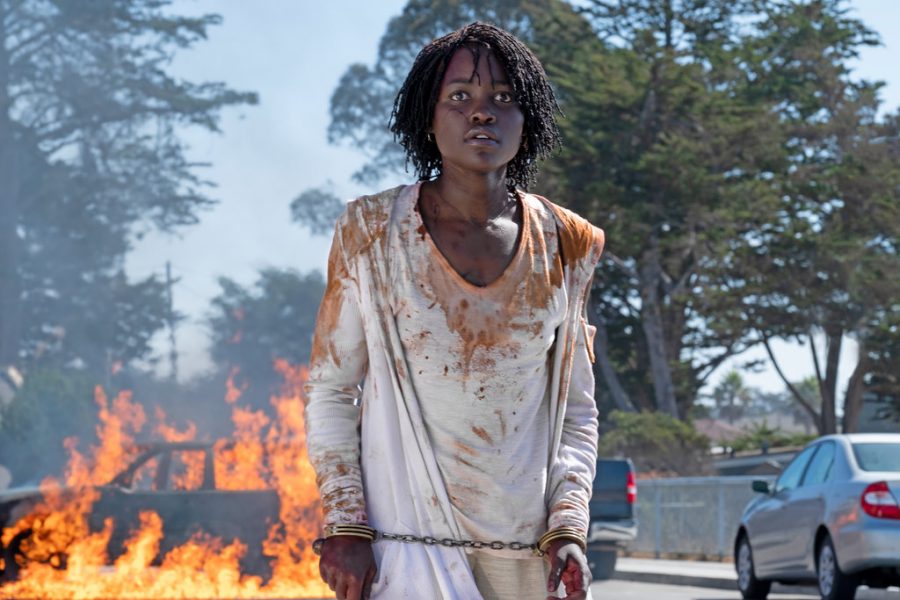 Lupita Nyong’o plays Adelaide Wilson and her doppelgänger in Jordan Peele's "Us."

The story follows Adelaide Wilson (Academy Award winner Lupita Nyong’o) and her family as they take a vacation to her childhood beach home, a place filled with fear and trauma for Adelaide. Her increasing anxieties about her past become real as her family is met with their doppelgangers, standing silently one night on the home’s driveway.

Following the success of 2017’s “Get Out,” “Us” was highly anticipated, as shown by the attention Peele received on Twitter and on the movie trailer, which currently stands at over 21 million views on Youtube

The film, which has already made almost $127.8 million (IMDb) as of Apr. 3, is a major success, earning the highest grossing opening weekend for an original horror movie. Peele wrote and directed the film, and produced alongside Jason Blum, Sean McKittrick and Ian Cooper.

Initially knowing that Peele both wrote and directed the film helps play into the magic of the work. Throughout, scenes are so captivating and beautifully portrayed that it is clear the mind of the writer had to be that of the director in order to give a written idea such life.

The cinematography, which is very pleasing to watch, contrasted the action, violence and occasional gore present throughout the film. Various camera angles and techniques were used to evoke emotional responses from the audience; symmetry adds to the aesthetics of the film, allowing viewers to feel comfortable despite situational fear. Suspense is specially formulated through the use of corners and long pauses, waiting for the camera to pan past walls in a Kubrick- like fashion.

Suspense was played with throughout to keep the audience on the edge- or curled up in the corner of- their seats. Both music and silence were very purposefully utilized, with quietness especially highlighting either a single sound or absolutely no sound at all.

Though very suspenseful, there was comic relief throughout that allowed the audience to feel comfortable while waiting in between scares.

Motifs were present throughout the film as well. They were not extremely obvious, but they were also not deeply hidden; a viewer with open eyes should be able to see repeated symbols throughout.

Looking at the work as a whole, there were definitely two very iconic scenes, both of which fed most heavily into the social commentary underlying the film. Exemplifying themes of oppression, marginalization and privilege, Peele really does not fall short in making this horror film reflect the horror of real life.

It is a very watchable horror movie in the sense that there is not too much gore or anything that would make a viewer want to cover their eyes, especially not someone who watches horror often. Though confusing, it is gripping enough to make audience members yearn for answers rather than feel frustration at the lack of clarity.

Overall, the movie is captivating and leaves viewers wondering. Horror fanatics may not think it is gory enough, and psychological thriller fans may not find it mind-bending enough, but the film is arguably a perfect blend between the two.

The themes explored are so easily applied to American society that viewers may not find themselves checking beneath the bed at night out of fear but rather looking within themselves and outward into the world facing them, now conscious of the very real horrors Peele laid out in “Us”.