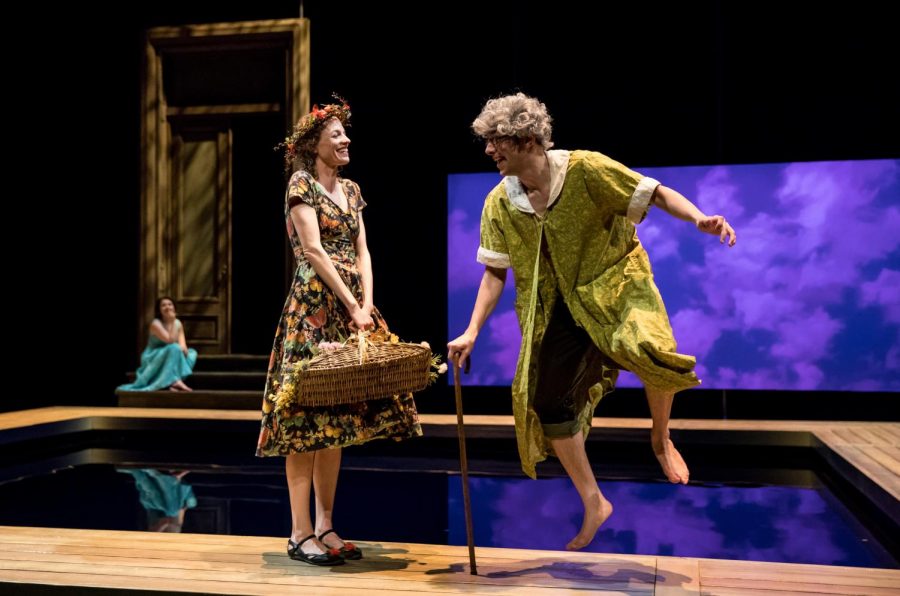 Courtesy of the Guthrie Theater, photo credit to Dan Norman.

Vertumnus, dressed as an elderly woman and played by Benjamin T. Ismail, attempts to woo Pomona, played by Louise Lamson.

Usually, “make a splash” is a turn of phrase, but in the case of the Mary Zimmerman direction of “Metamorphoses” on the Guthrie Theater’s Wurtele Thrust Stage, the phrase is all too literal.

The play, based on the myths of Roman poet Ovid, features several smaller legends told one after another for 100 minutes that fly by in a straight run like stories before bedtime.

This production, co-produced with Berkeley Repertory Theatre, features 1,500 gallons of water centered onstage. Throughout the performance, actors move through the water, sending droplets into the air to capture the lighting changes that transform the space into a field in the woodlands for the goddess of fruit trees and gardens to the fiery depths of the underworld for Hades himself. In fleeting moments, the dynamic action on stage made me wonder if we needed a splash zone.

While inspired by the classic myths of Ovid, the work has a modern playfulness that abounds throughout, without undercutting the serious moments. The performance made me laugh and brought tears to my eyes through the changing stories. Willing to put Phaethon, Apollo’s son who rode his chariot into a fiery end, on a bright yellow floaty and matching swim trunks, Zimmerman balances the humor with the retrospection.

Later on, the entire mood is shifted without being jarring. Each story is narrated sharply with a crisp, poetic precision that allows anyone, whether they knew about the myths before or not, to follow along. The visuals, combined with unfaltering storytelling, bring the tales to life better than the imagination could.

Throughout every story, the pool is used as a centerpiece. This dynamic element of the set is used purposefully without ever seeming like a flashy gimmick. The physical choreography both within and around the pool turn the still set into a roaring ocean wave or the tangled sheets of a bed.

Perhaps the sharp success of Metamorphoses shouldn’t be surprising considering Zimmerman produced the piece originally over 20 years ago in Chicago and New York, winning a Tony award for Best Director. Several actors from the original Broadway cast are also in this Guthrie production.

Berkeley Repertory, who opened the piece in January, extended the show an extra two weeks on their stage due to popular demand. The audience a month from the close of the Guthrie’s run with the piece, with their thundering applause, suggest that popularity will repeat.

This run of Metamorphoses will be playing on the Guthrie Theater’s Wurtele Thrust Stage until May 19. Tickets and more information are available through their website.