Canvas release is a goodbye for their staff

Current managing staff of the campus magazine all set to graduate. 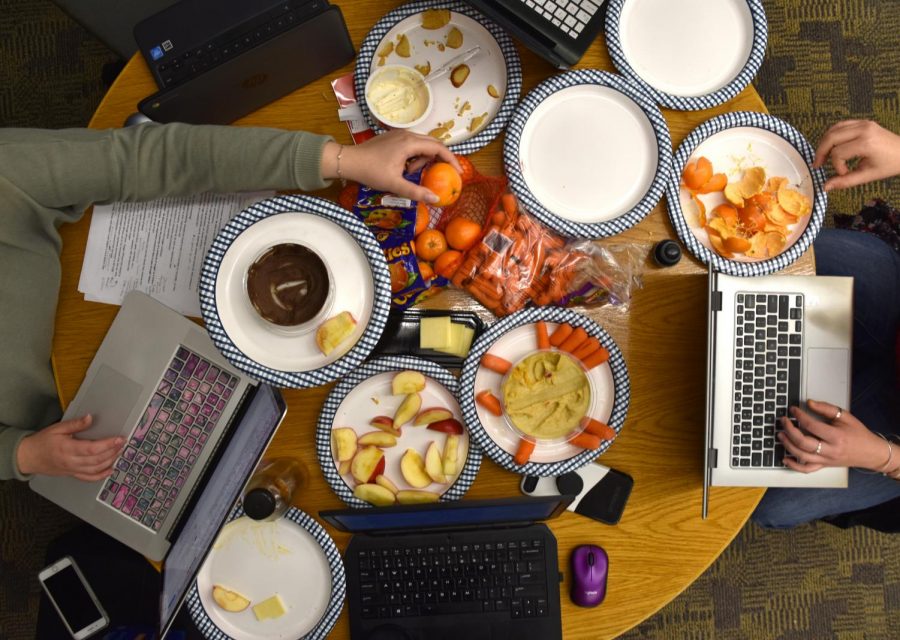 The editorial board of Canvas in the midst of editing with half-eaten snacks cluttering the space.

May is a month of goodbyes. For those heading home to another city or another state, it is a temporary parting from Hamline’s campus and local friends. For those graduating, the goodbye can be more permanent. For the staff of Canvas, May is the celebration of their spring issue’s release and a hearty farewell.

Canvas is the magazine on campus. Not long ago, Canvas was Pipers-in-Depth, but a rebrand re-envisioned the mission and style of the magazine into something quirkier and more representative of the perspectives on campus.

“I think what Canvas has got is really special– it’s a bit weird, it’s creative, it’s Hamline,” Chloe McElmury, Editor-in-Chief of Canvas and Columnist for The Oracle, said.

This year, May marks graduation for the entire managing staff of Canvas. Besides leaving behind the magazine itself, the next set of staff will inherit big hopes for the magazine.

“I want Canvas to be a larger entity on campus in the future,” Natalie Pieterick, Design Chief of Canvas, said. “There isn’t very many opportunities for graphic designers on campus, unless you have connections. But Canvas has been a chance to grow my skills set, and I believe that it could help others whether that be writers, artists or designers.”

This year, the development of the magazine brought some growing pains.

“We have one of the smallest budgets out of the Media Board, and it’s been a struggle at times to do everything we want to do,” McElmury said.

In the fall, McElmury took a pay cut from her stipend to pay contributors after the interest of writers outweighed the budget.

“I feel at times, Canvas is this quirky underdog, and that’s what I love about being a part of it.”

This year, Canvas continued to grow into its mission statement.

“I think with the issues this year, and specifically the one that is about to be released, we’ve taken steps to make Canvas more representative of Hamline, but also of a true magazine,” McElmury said. “ I know we have a ways to go, in terms of increasing involvement and representation on campus, but it’s made so much progress.”

This year, 15 contributors filled the magazine with perspectives on a wide variety of topics. For many contributors, Canvas is the chance to explore or share topics in a long-form style that does not fit in other campus publications.

Senior Leanne Byman, tackled a big topic for her final piece with Canvas: her personal experience with mental illness. As a magazine, Canvas gave Byman the unique place her piece belonged.

“As a place to reflect and share my personal experiences with mental illness, it was the perfect space,” Byman said. “I was able to do so without making it too needlessly artsy, the way writing about my experiences in Fulcrum would have required, but it also allowed me to approach the tone differently than I would have had I written to The Oracle about it, as an example.”

Many pieces in this issue follow the trend of Byman’s perspective, they are personal and reflective.

For those wanting to read Byman’s work alongside that of all the other contributors that make the magazine, copies are dispersed widely around campus so watch out for one.