An opera for the future

A musical adaptation of Octavia Butler’s “Parable of the Sower” comes to St. Paul. 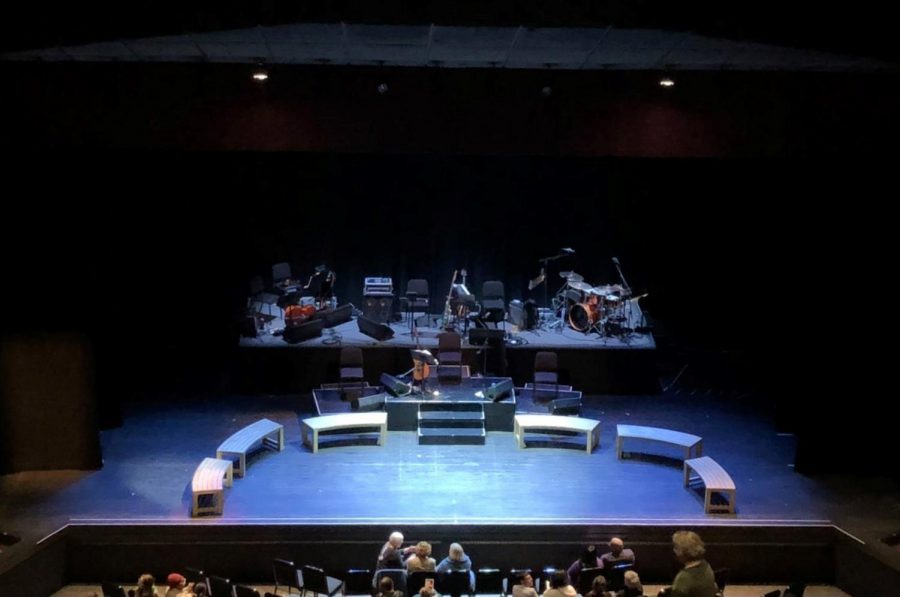 The stage of the O’Shaughnessy theatre at St. Catherine University, set for Parable of the Sower: The Concert Version.

To many, opera brings to mind associations of actors clad in antiquated attire and hefty wigs, trilling sky-high notes in Italian. Others might conjure up images of modern-day “rock operas” and musicals set entirely to song, such as Les Miserables, Jesus Christ Superstar and Joseph and the Amazing Technicolor Dreamcoat. But more likely than not, few would think of a folk sing-along.

However, this is exactly what happened in the first half of Parable of the Sower: The Concert Version, based on the 1993 novel by Octavia Butler- and here in the homeland of Bob Dylan, what better venue for such an occurrence than the O’Shaughnessy theatre at St. Catherine University? It may not be Dinkytown, but it is close enough.

The folk song- possibly titled “Don’t Let Your Baby Go to Olivar” as that is the repeated line in the chorus, though no names of songs are listed in the program- is performed midstory by the show’s creator Toshi Reagon. Consisting of around five or six verses and an equal number of collective choruses, its message is a warning against choosing debt slavery in a guarded company town over the lawless and uncertain anarchy of the outside, a decision protagonist Lauren Olamina (Tattiana Aqeel), her family and community must contend with in their near-future world. When the second chorus came around, Reagon expressed mock exasperation with the audience’s silence, and played the pre-chorus for a second time in order to give listeners the chance to sing along. And we did, growing louder and louder with each refrain in this acoustic ditty that is part spiritual revival and part civil rights anthem.

Taking its title from the New Testament Gospels, “Parable of the Sower” is the story of Lauren, a teenage girl living in a walled Southern California neighborhood in a time of mounting social tensions. Her most notable conflict is with her father, a Baptist preacher whose ideology runs opposed to Lauren’s philosophy that “God is change,” a motif that echoes throughout the musical’s rock melodies and inspires the creation of Lauren’s new faith “Earthseed.” As with most theatrical adaptations of literary works, it omits and amalgamates much of the content found in the book, and could perhaps be hard to follow for viewers unfamiliar with the text. The second half of the story, in which Lauren and a couple of other survivors of her neighborhood’s burning set out to find a safe haven and spiritual mecca, is particularly blurred and sped up in relation to its presentation in the novel.

The tunes during the second half, however, were as a whole slightly superior to those in the first. One number, a solo ballad for Lauren possibly called “Has Anybody Seen My Father?” showcased both tragic vulnerability and Aqeel’s stellar vocal range, which seemed more and more impressive with each repetition of the titular line.

Though the opera’s presentation at the O’Shaughnessy was this weekend only, and little of its musical content appears to be available online, if you are curious, I recommend you settle for reading the book. Seriously. It’s good.