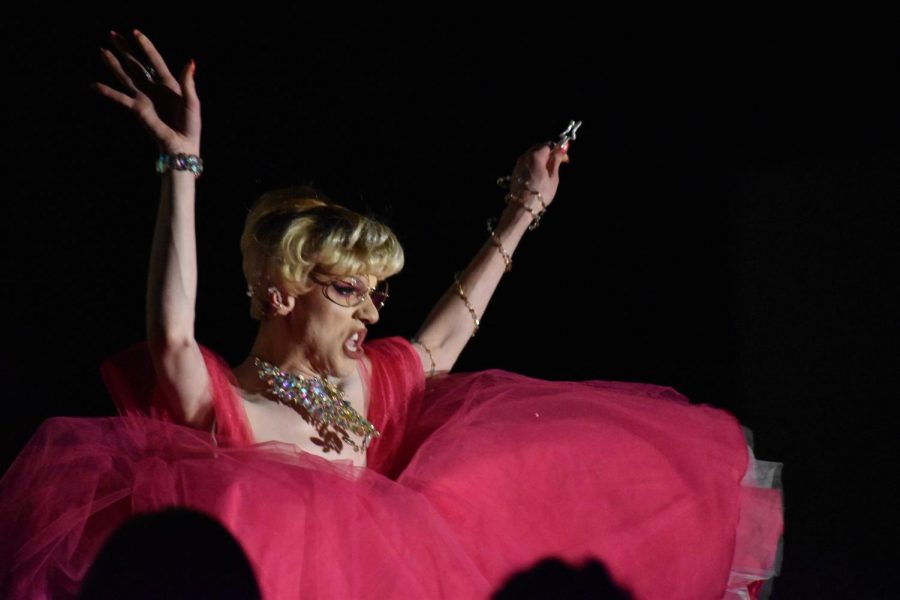 Hamline alumni Utica Queen charmed the audience with her Fairy Godmother routine in the initial round.

The final event of Hamline’s Coming Out Week, Spectrum’s Drag Show, filled the seats Oct. 18 as the audience prepared for an evening of talent and entertainment.

Buergi’s first drag performance was at Hamline’s 2017 amatuer drag show and they have since inspired others, including Dahl, to try the craft.

“My thing is that everyone should try drag once,” Buergi said, sharing the story of how Dahl followed that advice, now performing and competing within the drag community.

Dahl took it upon herself to organize the event, inviting local drag queens to perform and working out the details of the show. All of this was done in addition to working on her own performance.

“I’m so proud of her,” Buergi, who is also Dahl’s former NSM, said.

When asked how it felt to return and perform at Hamline, Utica Queen expressed that it was “magical” and that it felt like coming home.

Before their performance, Utica Queen addressed the audience, acknowledging the formative influence their years at Hamline had on them.

“I got my start here, I came out here,” Utica Queen said.

The performers did not hold back on the usual staples of drag shows. Along with the glitter, sequins and incredible wigs, the event also showcased the versatility found in drag performance.

Each of the queens performed with their own distinct style. Sissy Tops wowed the crowd with live vocals. Jenna Cis’s performance verged on the macabre and included glittery fake blood. Trisha Spectacle’s act had some interesting twists on well known Disney and Dreamworks favorites, most notably the Bee Movie.

Erin Bougie’s performance included cartwheels across the stage, while Dahlface strutted forward with absolute confidence. Utica Queen brought their award-winning talents back to where they started, at one point emerging in a flowing pink ball gown.

The audience tipped the performers throughout the show. Whoops and hollers arose amid the applause on a regular basis as the queens performed particularly impressive feats.

“It was really entertaining,” sophomore Nidhi Jariwala said, adding that if you blinked you would miss something since there was “never a dull moment.”

After the show, many of the audience members took the opportunity to pose for pictures and chat with the queens.

The consensus was that it was an incredible night, with audience members already looking forward to future Spectrum events.