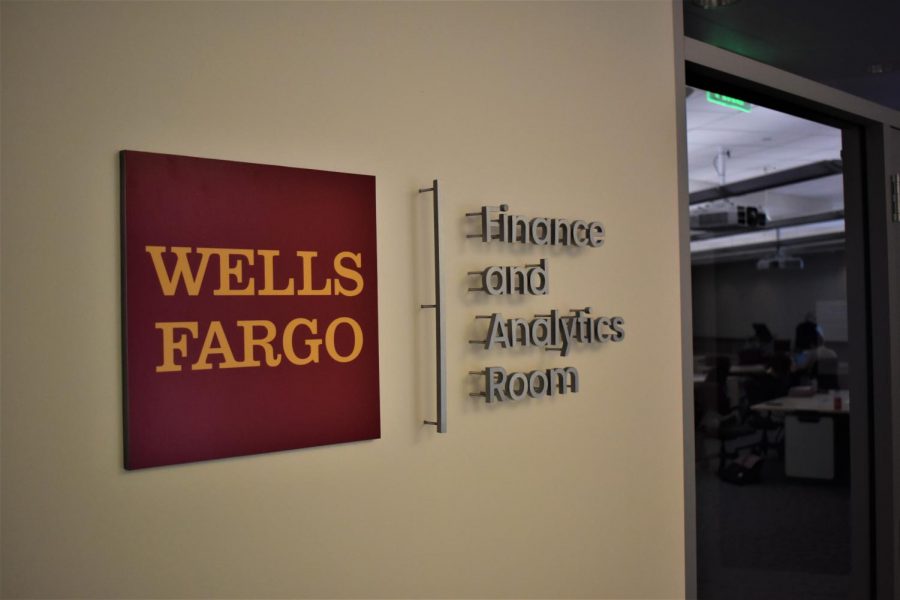 A sign marks the outside wall of the newly remodeled classroom in East Hall.

Thanks to an endowment from Wells Fargo, Hamline’s School of Business was able to undergo recent renovations, leading to the installation of a new Active Learning Classroom (ALC) on campus.

Founded with a $200,000 grant from the Wells Fargo Foundation, the ALC was created to serve finance, analytics and economics classes.

On Oct. 12, numerous faculty members gathered to witness the room’s reveal, which was cause for a celebratory ribbon-cutting ceremony.

“The room itself is designed to encourage applied learning, meaning its technology is state of the art,” said Director of Communications Jeff Papas, who attended the ceremony. “This includes, but isn’t limited to, stock tickers, interactive screens, touchscreen monitors and other technology innovations designed to assist modern learning.”

Dr. Anne McCarthy, Dean of the School of Business, elaborated.

“Each student workstation (called pods) seats four students and has a monitor that raises at the front end of the station. Two students at a time can display what is on their laptops to the monitor,” McCarthy said. “The students can connect to the pod monitor via a laptop, iPad or phone.”

The room is a major contributor to higher learning capacities for its students, as some of the technological additions have never been used by Hamline before.

“The document camera is the best in the industry,” McCarthy added. “The instructor can snapshot anything on the monitor or document camera and upload it for the students to access it at a later date.”

The classroom opened for teaching on Sept. 1. One common misconception is that the ALC was the first room on-campus to have naming rights by a big corporation — in this case, Wells Fargo.

“In my own research, I found that Hamline did have a Carnegie Library, which remained on campus until 1971,” Papas said. “You can see the old library’s original facade inside GLC.”

This library was later replaced with Bush Memorial Library.

Papas continued to add that “most named buildings on college and university campuses are named for benefactors, which in this case, Wells Fargo is.”

He expressed extensive joy for the new room.

“As for me personally, I’m pleased to see that the Wells Fargo Foundation shares our desire to educate tomorrow’s business leaders,” Papas said. “The Hamline School of Business is enhanced by this gift and our graduates will be even better prepared to lead in the working world thanks in part to this new study and class area.”

All students, regardless of major, are encouraged to stop by and look at the room, which is located in West Hall.