Hamline’s religion department coordinates with animal advocates and local religious leaders for a night of discussion on animal ethics. 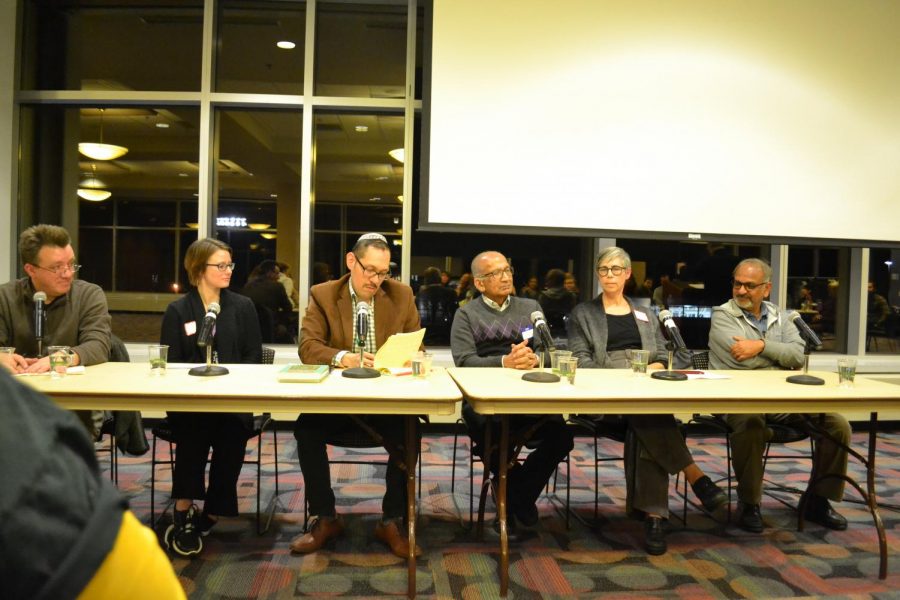 The six panelists present at the A Prayer for Compassion film showing had religious backgrounds in Christianity, Judaism, Buddhism, Hinduism, and Jainism.

The intersection of spirituality and animal ethics was the highlight of a film showing of A Prayer for Compassion hosted by religion professor Mark Berkson on Nov. 21.

“I really believe we should live in such a way as to, as much as possible, minimize or avoid causing unnecessary suffering or death to other sentient beings, it’s that simple,” Berkson said.

Berkson worked with the local nonprofit Compassionate Action for Animals, and the Hamline Animal Rights Club to host the evening’s thought-provoking discussion.

“Almost everybody has some kind of relationship with a companion animal like a dog or a cat,” said Laura Matanah, director of Compassionate Action for Animals. “A lot of people kind of don’t make that connection that y’know a pig or a chicken who is actually also a really caring, intelligent animal, who values its own life and has its own interests, so we help people make those connections.”

The event began with Berkson’s introduction of a panel of six religious leaders all from different faiths. Each panelist shared their distinct religious backgrounds, from being raised Christian to growing up under the Indian religion of Jainism.

“I think what I’m really looking forward to sharing is just, from within the Jewish faith, how much we actually thought about this from so many years ago, so much of our writings are over two thousand years old,” said Micah Miller, a panelist and rabbi at the Temple of Aaron.

The panelists shared a concern for the unethical treatment of animals and the ways their faith has been used for justification.

“We deal with laws and considerations with animals and how they’re supposed to be treated, how we’re supposed to look at them and really view them as partners in this world, not that we are powerful over them, but we’re just sort of one of them as well,” Rabbi Miller said.

A showing of the newly released documentary A Prayer For Compassion followed the panel. The film follows director Thomas Jackson on his travels across the United States and South Asia as he meets with people of various religions to learn about their spiritual understandings of animal life.

“For a lot of people, they think that y’know well I can’t be vegan because my God told me to eat meat, my God says it’s okay,” said Emily Lazear, senior and president of the Hamline Animal Rights Club. “Many of these panelists, this film, kind of dispels that myth and reframes how we think about religion and how we think about animals.”

The purpose of the event was not to create shame or pressure people into changing their lifestyle drastically. Instead, panelists encouraged individuals to thoughtfully consider their impacts on animal life, which can lead them on their own path to change.

“The metaphor I use now is just seed planting, whenever we talk to someone, we just like gently plant a seed,” Berkson said. “[We] think that over time they’re gonna see a clip of a documentary or they’re gonna read an article, or they’re gonna have a conversation with someone else, and all those things combined produce change that comes from within.”