Bombs away at Hamline Theatre

Fear, societal norms, politics, and the end of the world are explored in Hamline Theatre’s current production. 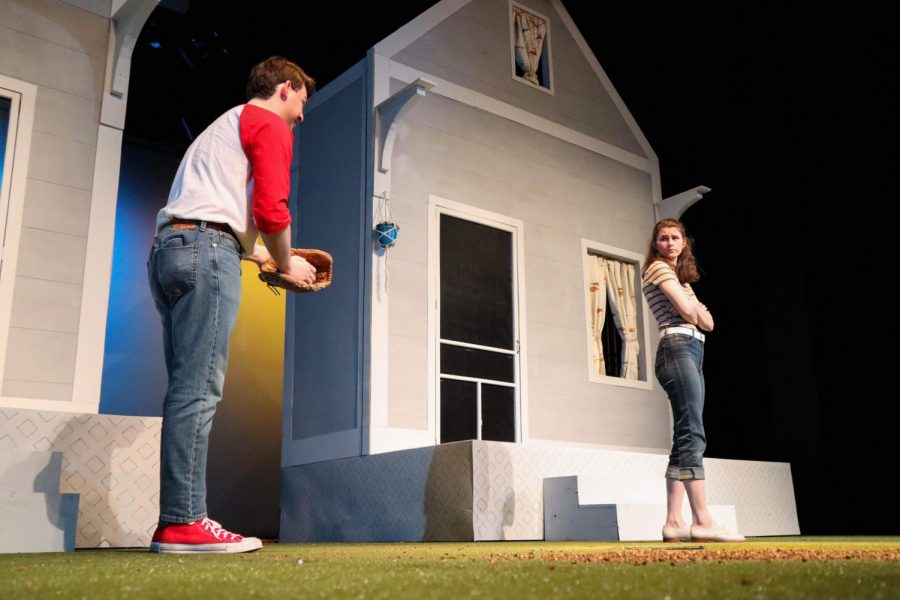 Two suburban kids worried about nuclear strike, Jake (played by ‘18 graduate Robby Miller) and Deana (played by first-year Clare Foy) argue about what would happen if they were the last two people in the world in Hamline Theatre's production of "We're Gonna Be Okay."

We’re Gonna Be Okay is the newest play performed by the Hamline Theatre Department. It follows two neighboring families living in America during the 1962 Cuban Missile Crisis. At a time when nuclear war seemed imminent to many, the idea of taking drastic measures to survive seemed inevitable.

Efran (played by first-year LaNiesha Bisek), is an overbearing and traditionalist man who first has the idea of building a bomb shelter. He attempts to convince his neighbor, the mild-mannered and timid intellectual Sul (played by junior Kyrsten Sauser), to help him build this shelter.

Sul initially refuses but is convinced by his wife, Mag (played by first-year Anika Besst), a nervous and quirky woman who acts as Sul’s emotional rock.

We’re Gonna Be Okay makes use of its 1960s setting through its set design, soundtrack and costume aesthetic. The play ties in the ever-shifting radical norms and societal expectations at the time that clash with the ever-regressive McCarthyism era of the 1950s.

There is a deliberate juxtaposition between characters throughout. Efran’s conservative, traditional view of America, the world and humanity clashes with his empathetic and task-oriented wife Leena’s (played by sophomore Andrea Lindner) liberal ideas that draw influence from the feminist movement.

Sul and Mag have to deal with their difficult connection to their free-thinking daughter Deanna (played by first-year Clare Foy) who works to come to terms with her own sexuality and complex feelings towards her role as a woman in America. Efran and Leena’s son Jake (played by ‘18 graduate Robby Miller) is an emotionally complex character forced to reexamine his ties to his own masculinity.

The soundtrack is full of 1960s romantic pop songs that transition seamlessly between scenes, or ‘chapters’ as they are known in this production. The lighting and staging are very minimal yet effective in their usage as they highlight the most important moments. The most innovative aspect of the play is its intermission before the second act, which audiences will have to see in order to take in the cleverness.

As for the acting, each member of the cast delivers a compelling performance highlighted by character writing that digs deep into the core pathos of the script. The performances are expressive enough to add small nuances and interpretations that will heighten the audience’s enjoyment of the characters and the story.

As of the publishing of this piece, We’re Gonna Be Okay is still in Simley Theatre for three more shows; Thursday, March 12, Friday, March 13 and Saturday, March 14. Tickets for Hamline students are $2. All other tickets are $8.