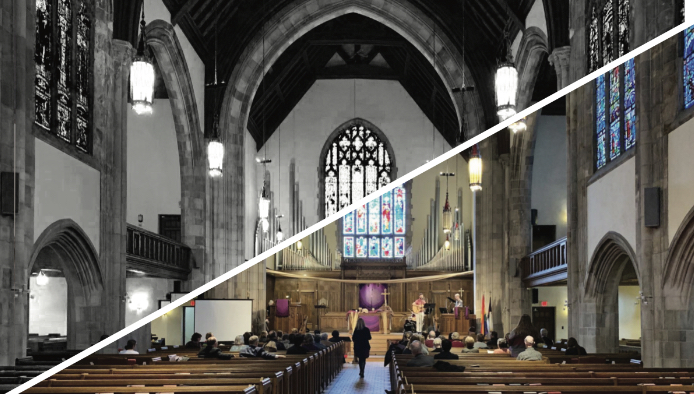 As the United Methodist Church prepares to split over LGBTQ rights in their denomination, Hamline chooses inclusivity and love for all.

As the United Methodist Church (UMC) gets closer to a make-or-break moment for the future of LGBTQ rights within the denomination, Hamline has asserted its commitment to welcoming individuals of all sexualities and gender identities.

On March 1, Hamline’s Board of Trustees passed a resolution to formally align Hamline with the Reconciling Movement, the UMC’s pro-LGBTQ arm. The resolution originated with first-year Emily Hilderbrand, the student leader of the Love Boldly campaign.

“Only one other school has [passed a Reconciling resolution],” Rev. Mariah Tollgaard of Hamline Church said. “This is the first student-led effort.”

Before reaching the Board of Trustees, the resolution went through HUSC, the Faculty Council, the Staff Association, the President’s Cabinet and the Student Affairs Board. It was unanimously approved by the voting body at all levels.

“I’m hoping personally that there will be a chain reaction now, because Hamline did it,” Chaplain and Director of the Wesley Center Nancy Victorin-Vangerud said. “It took a while, and it took someone like Emily, but it’s doable.”

UMC doctrine officially prohibits same-sex marriage and the ordination of LGBTQ clergy, but individual churches and church-affiliated institutions have gone against this doctrine for years.

One such proposal is the Protocol of Reconciliation and Grace through Separation, which sets aside $25 million for conservative congregations and conferences to leave the UMC and create a new traditionalist denomination.

This legislation would also place a moratorium on charges brought against clergy who are LGBTQ or officiate same-sex weddings. It was crafted by United Methodists from all sides of the debate, with assistance from renowned mediator Kenneth Feinberg.

Hamline, meanwhile, might have to amend its charter based on what legislation is adopted regarding the future of the church.

As a UMC-affiliated institution, a quarter of Hamline’s trustees must be United Methodist. The bishop of Minnesota’s Annual Conference, who is currently Bruce Ough, gets an ex officio position on the Board of Trustees.

“The Hamline Board of Trustees and the Board of Trustees of the Minnesota Annual Conference of the [UMC] have agreed that we will put forth to the annual conference membership in June, a proposal to modify certain language of our charter that would retain the percentage of trustee membership on our board, retain Bishop Ough… but to take away some of the governance aspects the Minnesota Conference has over [Hamline],” Vice President and General Counsel Cathy Wassberg said.

However, the spread of COVID-19 brings fears that General Conference might not take place at all this year. Delegates from all over the world are scheduled to meet in May at Minneapolis Convention Center, but international travel and large gatherings are frequently being canceled due to the pandemic.

Victorin-Vangerud expressed distress at the possibility of even more uncertainty about the denomination’s future.

“If the General Conference doesn’t meet… how the hell are we going to go on another year in this state of polarity?” she said.