Current events: On the basis of saving lives

As weeks pass since George Floyd’s death, I challenge people who choose to use their time and words to challenge a movement of liberation rather than fully support it. 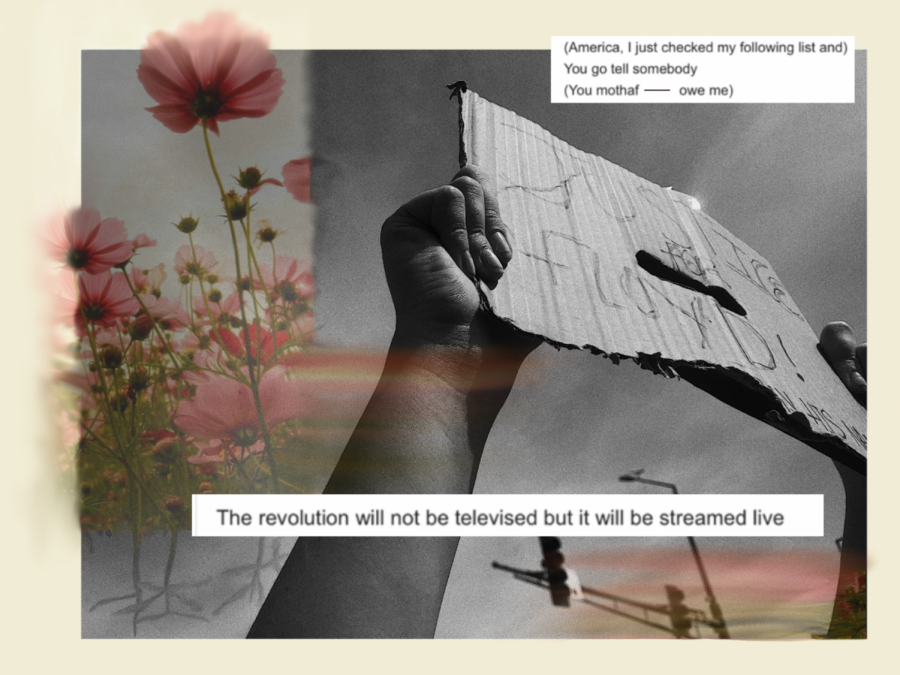 On May 30, protestors peacefully gathered outside of the St. Paul capitol to continue fighting for justice, beginning at the building and then eventually covering a lot of ground, including stopping traffic on I-94. This sign, sporting “Justice for Floyd,” speaks to the actions of those still protesting, with justice going beyond the arrest of the police officers.

BEFORE YOU READ: This article will discuss topics of police violence. All those with faces featured in the accompanying protest photos consented to their image and name being used.

As someone working in student media, it has been hard to know how to report on history in the making. Throughout the last two weeks, my reaction has been to help first, write and take photos second. When it comes to producing work for the media, I have to question what my place is, and ponder what can I truly add to the conversation that has not been already said.

On May 30, I stood among a countless crowd gathered at the St. Paul Capitol, not with the intention of reporting but of standing in solidarity. There, two Black men around my age stopped my friend and me. One of them asked if we had a hair binder. He had his hood up, sharing “I have a lot of hair, and I would like to tie it up rather than wear my hood.”

After searching through our bags and finding no extras, I offered the hair binder around my wrist to them. This was my favorite hair binder, I bought it while studying abroad, and giving it away meant my own mane would be hot on my neck for the entire protest. Even though this was going through my head, I handed it over. I know I would want someone to do the same for me.

“Thank you,” he said. “I can’t be walking around here with my hood up. You probably saved my life.”

I stood in disbelief. My considerations before handing the hair tie over (my slight emotional connection and my own discomfort of having heavy hair) were so minimal. However, his considerations, life over death, were monumental. I do not know if I really saved that person’s life, but my small action, accompanied by listening and trying to understand someone whose life I will never really understand, had the potential to save someone’s life. With that, I get to why I am here writing now.

If non-Black people have the opportunity to do things that have the potential to save someone’s life, why aren’t we? My hope is to remind people that their simple actions, or lack thereof, may be impacting whether or not a life can be saved.

The military and police presence at this protest reminded me of one harmful action people can do, which is only to defend police and otherwise remain silent. With ACAB (short for “All Cops Are Bastards”) trending, it can be easy for law enforcement families to jump to their defense. Likewise, it can be easy for (predominantly white) people who have always felt protected by the police to defend them, rather than see the bigger picture. However, choosing to defend an individual person in law enforcement, or only choosing to speak out to make it clear you are on the side of the police, is a very oppressive action.

The time spent arguing, posting or defending the police is time a person could spend learning more about the complexity of the 13th amendment, and how modern policing and the prison system are essentially reformed slavery (the documentary 13th on Netflix details this very well). This is time they could spend talking with a “good cop” that they know about what a future without a police force would look like, where their role would look different but would truly serve the community as public safety. The time spent ignoring the bigger issue at hand, death after death after death, while arguing against the use of ACAB, is oppressive. Related to my story earlier, these are not actions helping prevent further deaths. This applies to both in the Black community and for officers, as a future with systemic change will put less public safety people in life or death situations, as well.

Supporting systemic change supports the already good officers, as well. This is something that can easily get lost, especially for someone who is immediately on the defense. If they truly are a good officer, their actions, words and support for a future with better public safety should speak for itself.

In a similar way, this thought process can be applied to arguments of “looting is bad” and “all lives matter.” When looking at the police violence, and the very obvious cry for systemic change from a huge group of people, spending time reminding people of the downfalls of what is going on is not helpful. They are important to acknowledge, but not fixate on. There are much bigger issues at stake.

Many who support the Black Lives Matter movement, myself included, are not in favor of the looting, either. But we can understand how it is not our place to tell others how to grieve. And while some people were claiming electronics, there were also people grabbing diapers, formula, food. How is shoplifting necessities more of a crime than the fact that people do not have access to basic needs in a country claiming to be free, with equal opportunity?

Likewise, those chanting “Black Lives Matter” are doing it as a reminder, because in this country, it has been shown time and time again that Black lives do not matter. So, to push back with “all lives matter” is to ignore the years of oppression Black people faced and continue to face, it is to put everyone on the same level. Of course all lives matter, but right now we are talking about Black lives, and within this movement comes support for indigenous folks and other people of color, too.

I want to leave with this. A belief that police go into their jobs with good intentions means nothing when the bad police use it to murder. Petty theft should not be a crime when it is done out of necessity, and we cannot care about the losses of a big corporation until we care about the loss of lives happening in this country. “All lives matter” means nothing until we have proven in this country that Black Lives Matter, through systemic change and reparations.

Listen, understand, and know you may never really understand. There are plenty of arguments that could be in response to my writing, like the death rates of cops or arguing “Black on Black crime,” but are they helpful? Are including those arguments, to someone who is educated on the subject, helpful? Will doing that save lives, or will it merely show your opposition to radical change? Right now, all of us have the choice to take action that supports the opportunity of saving lives, regardless of political beliefs. Saving lives is not political. Choose the side of history that saves lives and will bring future peace. Choose to use your time and voice to speak up for the good rather than challenge it.