A conversation on substance abuse as a means to prevention. 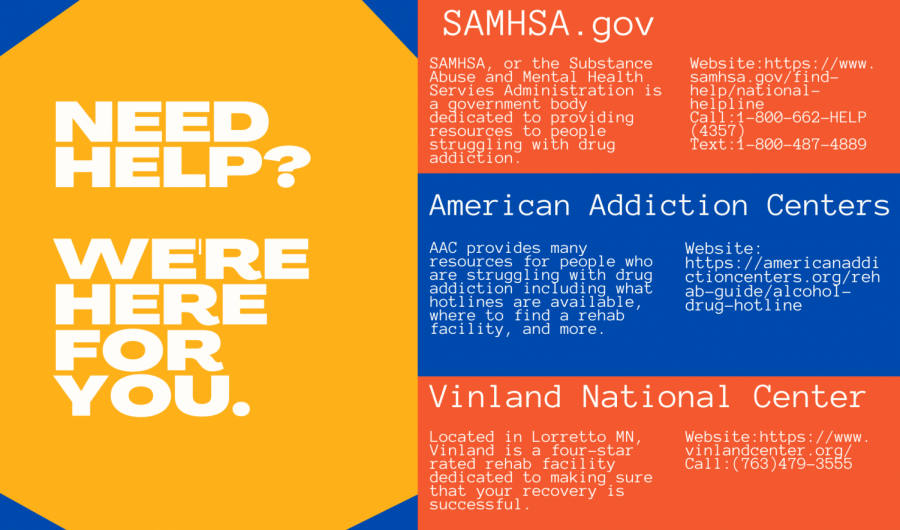 When October rolls around, festive folks have one thing in mind: Halloween! But, did you know Spooktober is also National Substance Abuse Prevention Month? Although October has passed, the prevention of substance abuse is a conversation worth having in November as well as  every other month of the year.

According to the American Addiction Centers, one in ten people over the age of twelve have an addiction.  Addiction affects the young, the old, the poor and the wealthy. It steals the lives of close friends, family and those we admire- even if we may not know them personally. This Dec. 8 will be one year since rapper Jarad Anthony Higgins, or “Juice Wrld,” passed away after overdosing on Percocet, which contains oxycodone. He was twenty-one years old.

The opioid epidemic continues to kill thousands of Americans every year as the nation considers how the reformation of drug policies thorough education on substances and addiction is crucial. The word “addiction” is often used colloquially. Not only is this an inadequate way to describe one’s fondness or obsession with an activity like Netflix or working out, but it downplays the real pain and destruction of this condition.

Addiction is a disease of the brain’s reward system where drugs create a deceptive sense of euphoria. After repeated exposure to a substance, the reward circuitry in the brain adapts to the presence of the drug. Over time, one pill or a couple of drinks loses its potency and the brain’s reward system requires more of the drug to feel the pleasure it once did. This is called tolerance. Continued use of substances can result in dependence. Once the person becomes dependent on the substance, their brain, body or both, craves it to feel “normal.” This progression often leads to addiction, a medical condition that requires treatment to cure.

Poor grades, the deterioration of personal relationships and preference for drug-based relationships, low self-esteem, isolation or any negative disruptions to one’s life because of the use of substances are all indicators that one should seek treatment.

“Historically, there was a lot of misconception that addiction can be cured by treating mental health,” said Kate Roselle, a licensed clinical social worker for the Betty Hazelden Foundation.

Though mental illness and addiction are dual disorders, the treatment for addiction is effective only by treating the disease itself and cannot be cured by treating something else, making it a “primary disease.” Adverse childhood experiences predispose an individual to addiction but according to Roselle, genetics are 40-60 percent of the risk. The remaining percentage is influenced by an individual’s environment and the age they began using substances. The progression of dependence is different for everyone. For someone genetically predisposed to addiction, a single use could have them hooked.

“If someone is genetically predisposed to addiction, any amount of drug is not good for them,” Roselle said.

For those who began consumption at a young age, dependency might progress over several years as the brain develops into the late twenties. The stigma of addiction can make the isolating disease even more lonesome, but there are a multitude of resources available for those seeking treatment. The Hazelden Betty Ford Foundation, where Roselle works, is one.

One way that we can begin healing as a society is through proper education. The “Addiction Center” recorded 700,000 drug related deaths between the years 1999 and 2017, suggesting that “Say No To Drugs” and abstinence-based education may need some tweaking.Roselle suggests the teaching of “value-based-decision-making.” People should be asking themselves, “Does drug use and potential dependence fit into my goals?”

Experimentation is characteristic of young adult life, but the longer someone holds off on experimenting with addictive substances like alcohol and marijuana – yes, weed is addictive – the better off they will be neurologically speaking. Controlled use is possible for some, but healthy activities are the safest way to go.

“The opposite of this disease is really connection,” Roselle said. You can support your Hamline family by staying informed and exercising empathy.