Former Vice President Joe Biden and Kamala Harris make history, cinching an Electoral College victory and breaking the record for the most total votes a candidate has ever received in the history of the United States. 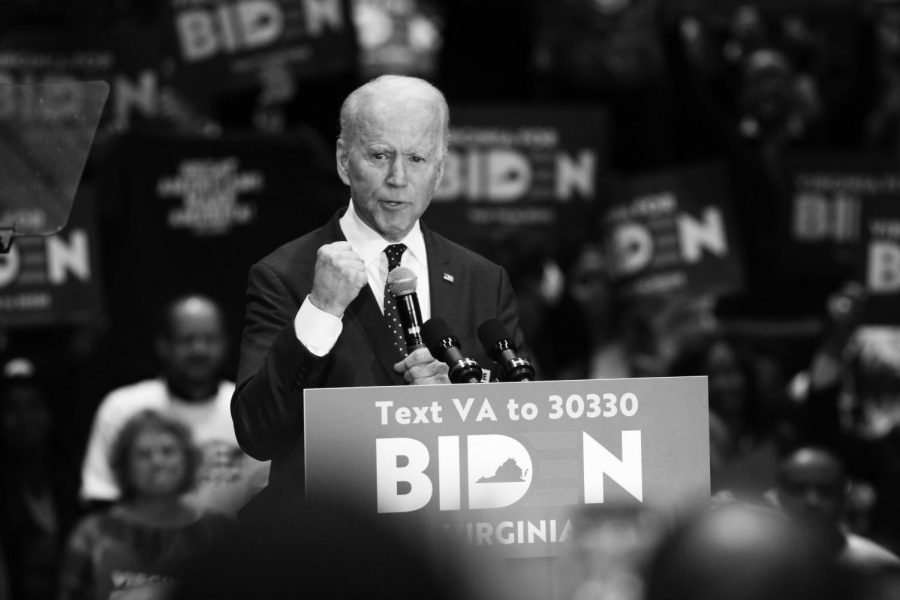 Carter Marks, ACP
The nation watched for days as votes across the country continued to be counted, and the presidential race became tighter. On Sat. Nov. 7, the projected winner of the presidency, former Vice President Joe Biden, was announced by multiple news networks, including CNN and The Associated Press." />

Carter Marks, ACP
The nation watched for days as votes across the country continued to be counted, and the presidential race became tighter. On Sat. Nov. 7, the projected winner of the presidency, former Vice President Joe Biden, was announced by multiple news networks, including CNN and The Associated Press.

CNN was the first to call the Commonwealth of Pennsylvania and thus the presidency for Democrat Joseph R. Biden the morning of Nov. 7, followed by every major news network in the country.

Biden secured his win with an extraordinary 74 million votes, the most any candidate for president has ever received in the nation’s history. He broke the last record set by President Barack Obama in 2008 at 69 million votes.

Biden’s popular vote total is only expected to grow according to CNN, as votes are still being tabulated in states like New York and California. Many ballots remain uncounted in heavily populated Democratic strongholds; particularly throughout the Bay Area in California, as well as in Manhattan, Queens and the Bronx in New York.

Biden will be the first successful candidate to unseat a sitting President in nearly three decades, denying Trump a second term. In the past century only three have been unseated after their first term and Trump is expected to become number four.

Biden is currently leading in Georgia which has yet to be called as of Nov. 8. The Georgia Secretary of State has announced that the state will be performing a recount as the vote is so close. Should Biden carry Georgia after a recount is performed, it would be a major win for Democrats. The last time the state went blue was in 1992 for President Bill Clinton.

North Carolina and Alaska also have yet to be called as of Nov. 8, both favoring incumbent President Donald J. Trump.

Alaska, which as of Nov. 8 has reported a mere 53 percent of its vote, is the slowest state to report in the nation. Due in part to the COVID-19 pandemic, and in part to Alaska’s rural nature, a record number of Alaskans voted before election day, either by mail or in person. Results of the election as of Nov. 8 only include votes cast on election day and early votes cast before Oct. 29. The state is expected to begin counting the remaining 122,000 ballots on Nov 10. According to state law, they must finish by Nov 18.

Trump has indicated through Twitter and his address to the nation on Nov. 5 that he is unwilling to accept the results of the election and is expected to continue vast legal challenges in many swing states. Trump has alleged “voter fraud” without any clear evidence. So far, the courts have dismissed many of the Trump Campaign’s lawsuits.

In addition to making history as the 46th President of the United States, Biden will become the oldest sitting President ever, a title previously held by Ronald Reagan.

Biden’s running mate, Vice President-elect Kamala Harris, is set to hold the highest office any woman has ever held in U.S. history, making her the first woman, first African American, first Indian American and first child of immigrants elected to the Office of the Vice President.

Biden is set to lead a deeply divided nation through the remainder of the COVID-19 pandemic and subsequent recession. He is expected to govern with a split legislature, with Democrats poised to remain in control of the House, and Republicans favored to keep the Senate.

Candidate for Senate in Alaska, Dr. Al Gross believes he still has a shot at unseating Republican Dan Sullivan. The campaign believes that if mail-in ballots favor Democrats as they have in other states, Gross has a path to victory. The last three Alaska Senate polls show Sullivan leading the race by three points.

Two Senate seats in Georgia will go into a run-off election taking place on Jan. 5. Democrats and Republicans are expected to invest heavily in the peach state showdown and will determine who controls the majority in the Senate.

President-elect Biden will begin his transition promptly; announcing that he will name a 12-person task force dedicated to addressing the COVID-19 pandemic on Nov. 10. It is unclear whether the current administration will work with the Biden team during their final days in the White House. This is traditionally considered to be a bi-partisan transition period for the nation.