At a Hamline-Midway roundtable on April 19, elected officials connected with residents, expressed concerns on Operation Safety Net. The next day, a decision was reached in the State of Minnesota v. Derek Michael Chauvin trial. 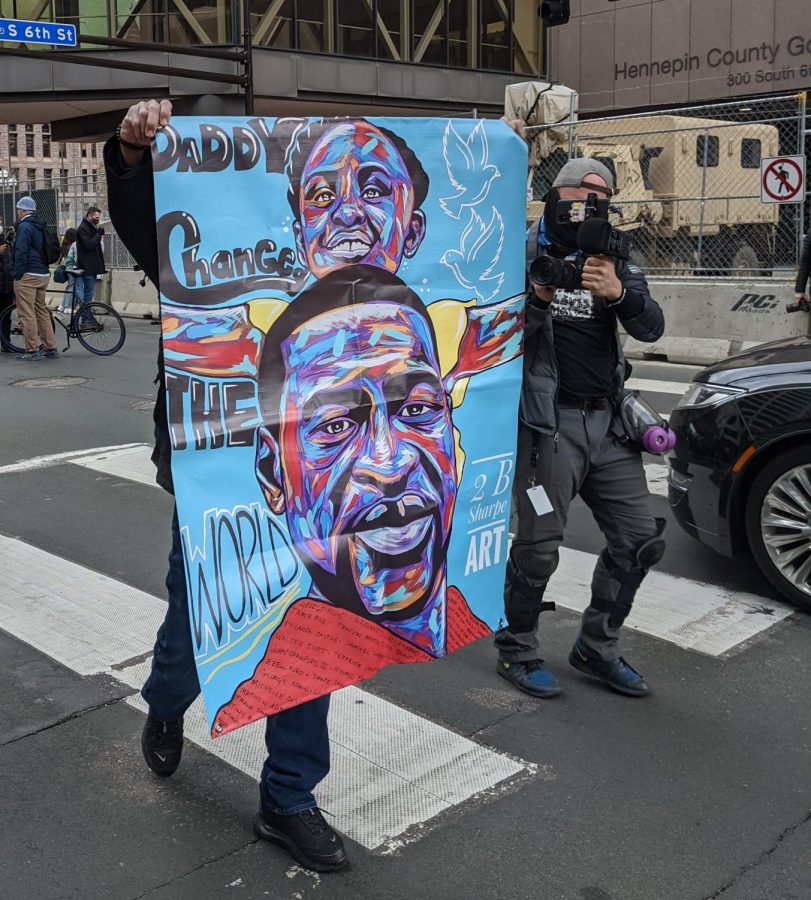 Lydia Meier
A sign of Gianna and George Floyd is held up against the backdrop of the heavily armored Hennepin County Government Center. " />

Lydia Meier
A sign of Gianna and George Floyd is held up against the backdrop of the heavily armored Hennepin County Government Center.

A number of Hamline students and one Hamline professor, who are residents of the Hamline-Midway neighborhood, were in attendance.

The planning session was to communicate with the community ahead of a verdict in the Minnesota v. Chauvin trial.

Sen. Erin Murphy agreed, saying, “We wanted to make sure we were connecting intentionally in front of a verdict.”

After all the elected officials present had been introduced, the conversation, guided by questions in the chat, turned to Operation Safety Net (OSN). Murphy explained that from what she knew, she believed that OSN was a variety of law enforcement entities, including the National Guard, coming to the cities in preparation for the verdict. OSN was launched early in response to the death of Daunte Wright, a 20-year-old Black man shot by a police officer in Brooklyn Center, Minnesota.

“I think I could be pretty frank about this… that I think [OSN] was a huge misstep,” Rep. Athena Hollins said. “When we’re talking about law enforcement killing people, the answer is not putting more law enforcement everywhere, as a reaction… I’ve been in a number of meetings with the government, and I would say my statements have fallen on deaf ears.”

In an email a few days later, Hamline senior Rob Greenough said he was hoping for more specifics and was disappointed by the “defeatist attitude of state Rep. Hollins,” specifically in this statement.

Although not all participants agreed with Hollins’ perspective, discussion remained largely civil in the Zoom chat, with resident Heather Quinn writing, “The way the community came together last year was so beautiful, from the neighborhood cleanups to the many food donation and distribution sites. That’s what made me and my family feel safe… OSN does the opposite. I’d love to know ways that our community can come together and support each other now, not just in the aftermath of crisis.”

In the end, no crisis came to pass. The jury in the Minnesota v. Chauvin trial reached a verdict after 10 hours of deliberation, and Twin Cities community organizer Toussaint Morrison announced “guilty!” to a crowd of hundreds outside the Hennepin County Government Center. Voices immediately spilled into cheers and applause as Morrison read the guilty verdict for each of the three charges against Chauvin.

Likely, there were some Hamline-Midway residents celebrating in the crowd.

Although the fight for racial justice is far from over, the result of the Chauvin trial creates a new precedent: the first time in Minnesota’s history that a white police officer was convicted of killing a Black civilian. The Chauvin trial is the center of a larger conversation on racism in America.

Sumaya Ali, a participant at the community planning session, noted that “it’s not really possible to heal from trauma that’s actively being enacted against our communities.”

English professor Mike Reynolds also noted this, and said that he is most worried about the trauma and emotional burden sustained by members of the community, and hopes to focus “community engagement” on mutual protection and support.

“There are long-term needs and issues, as many noted last night, which must continue to be the focus of community organizing and action,” Reynolds said. “Ideally, an event like [this community conversation] has this short-term impact but also plants seeds and strengthens community networks for long-term transformation.”

In an email a few days later, Hamline student and Midway resident Emma Harrington agreed. “I am glad to see Chauvin convicted of all 3 charges but the police system is still terrorizing communities and taking lives. We have so much work to do and committing to justice is committing to lifelong work.”