This summer Hamline Public Safety (HPS) switched their uniforms from a polo shirt to a bulletproof vest, prompting some students like Ruqa Martins to ask “who’s shooting?” 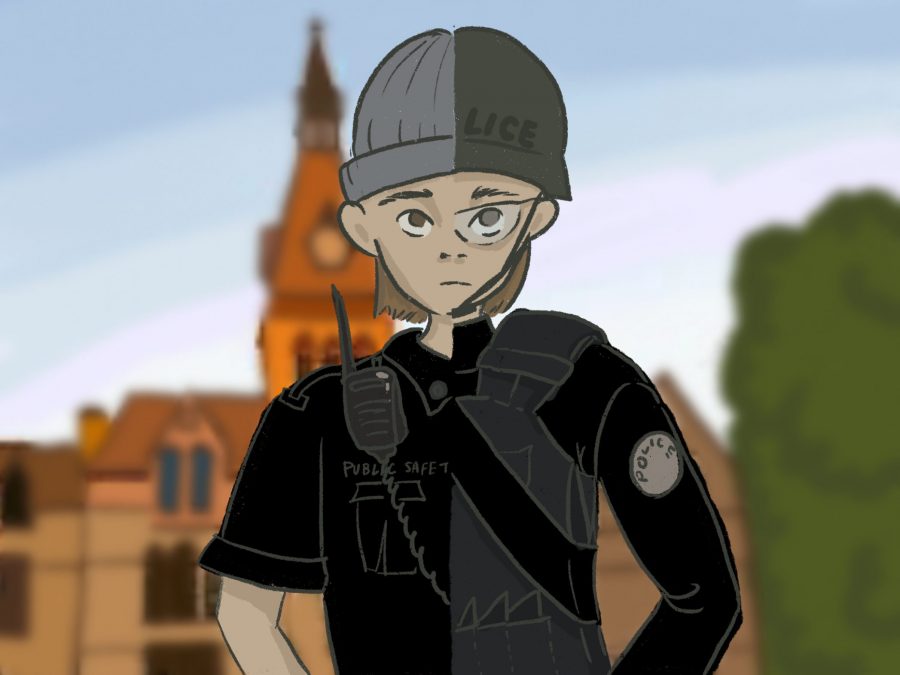 What does safety on campus look like? What should it look like? Who feels safe, and who feels threatened? Hamline students are questioning the university’s approach to safety, with the new investment of updated Public Safety uniforms.

Kenzie Harstad, a junior at Hamline, started a Change.org petition asking Hamline Public Safety (HPS) to return to their old uniforms. The petition has gathered just over 125 signatures as of this reporting.

Harstad writes that the “uniforms changed from a regular polo to a bulletproof vest and police-issued belt.”

Harstad is a New Student Mentor (NSM) and started the petition after she heard from her first-year students, particularly students of color. These students experienced multiple “unsettling” situations with HPS, and their appearance and presence on campus in general has caused discomfort.

“It was an unwelcoming environment and it made me really upset because these are my students,” Harstad said.

Ruqa Martins, a junior and Resident Assistant (RA) on campus, was put off by the change in uniform.

“You wearing bulletproof vests, implies that someone is shooting. Who is shooting?” Martins said.

The sudden change comes as the Twin Cities is seen as ground zero for the future of policing and safety after George Floyd, an unarmed Black man, was murdered by Minneapolis police officers.

“Especially in the wake of [Floyd’s murder], I feel like them having bulletproof vests with like, no explanation is kind of scary especially with students of color, Black students, Muslim students, all that, because sometimes we are targeted by cops,” Martins said.

Martins also expressed that she was frustrated by the infrequent and sporadic communication from HPS.

The Oracle was unable to arrange an interview with HPS but received a statement from Melinda Heikkinen, the Director of Public Safety.

“Several months ago it became apparent that the uniforms being worn at the time were not fit for purpose. After considerable research, selected uniforms that fit better, support a far more professional appearance, allow staff to wear vests outside their shirts, and are less expensive than those they replace.” Heikkinen wrote.

Heikkinen disputes some of the claims raised in the Change.org petition.

“HPS is here for our students;  I have never stated, and would never state otherwise and I’m concerned that was heard in a conversation I had with a student. This claim in the petition is hurtful to me and staff members, who give their time on days, nights and weekends to help keep students safe, in addition to being inaccurate.” Wrote Heikkinen in response to a quote Harstad wrote on her Change.org post.

“First and foremost I would like to cover up or get rid of the bullet proof vest,” Harstad said.

She would also like to see the batons disappear from HPS’s duty belts.

Martins says HPS feels disconnected from the Hamline community, with bulletproof vests making them seem even less approachable. She wants to see them introduced during first-year orientation and give students a chance to meet officers individually.

Finally Harstad wants to engage HPS in a greater dialogue on our campus.

She wants to see more transparent communication, and envisions a “barbecue neighborhood night, where HPS does not come in uniform, like normal, off duty,” Harstad said. “So students have a better bond with them, like professors, and students can express their concerns about HPS, and they can answer those questions and describe their job in greater detail.”

“The HPS staff cares deeply about how it is perceived and the quality of its work on campus. No one begrudges students the right to petition or engage with the administration of their public safety department. In fact, we encourage it. I welcome the opportunity to talk with students and community members to share positive ideas,” writes Heikkinen to end her statement.

If you are interested in signing Harstad’s petition you can do so by going to: tinyurl.com/HamlinePetition. Heikkinen said she encourages students to share their ideas and you can do so by emailing her at mheikkinen01@hamline.edu, or the HPS office at security@hamline.edu.