The COVID collection: the best binges

Deck: Over the past two years, as we searched our unlimited selection of content, a few shows have stood out, gaining intense, yet ultimately short-lived attention from the masses. 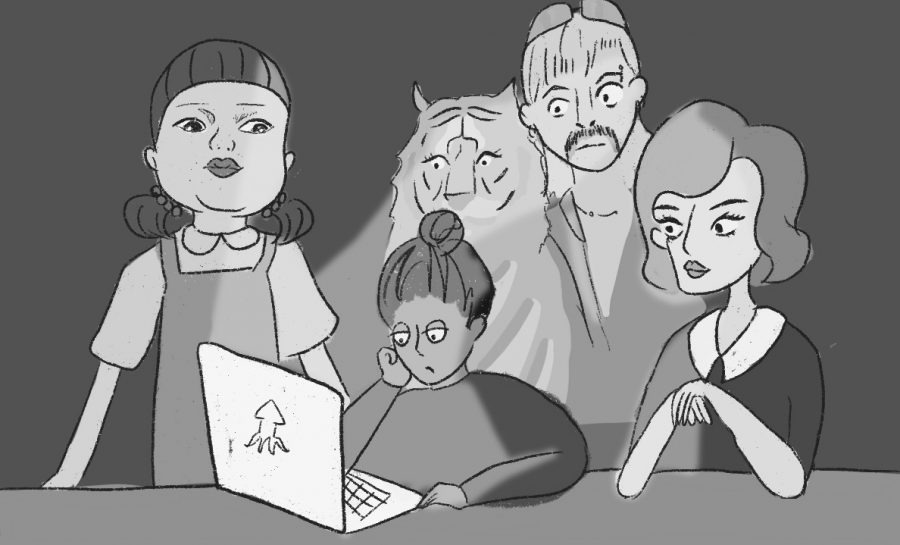 A true crime documentary uncovering a rivalry between two exotic animal owners, a historical drama of an orphan girl’s journey to becoming a chess legend, and now a Korean drama detailing a brutal survival game where competitors play childhood games for a cash prize.

On the surface there doesn’t appear to be much of a connection between these stories, yet they have all kept us awake late into the night as we desperately await their conclusion. From “Tiger King” to “The Queen’s Gambit” and the most recent “Squid Game,” Netflix has released a number of hit programs since our first lockdown in March 2020. As someone who watched all three of these mini-series during their peak, I’d like to take a look back and consider just why it is that these narratives captured our collective interest.

Our propensity to “binge-watch” shows is nothing new. Following a survey in 2013, Netflix revealed that 61 percent of users reported regularly binging—watching two to six episodes in one sitting. The average runtime of the three noted series is 397 minutes or almost 7 hours—easily interchangeable for a shift at work or a night of sleep. The first season of “Squid Game” is the longest: 487 minutes over the course of nine episodes. Brevity is the most obvious factor for success, coupled with a platform that presents it to us all in one course.

Despite their short length, these shows are absolutely jam-packed with drama, leaving cliff-hangers at the end of nearly every episode. Take “Tiger King” for instance, I went into the show expecting to learn about the cruelty of the exotic animal industry, but instead I’m listening to a murder conspiracy plot about a woman putting her husband through a meat grinder, now suddenly this Joe Exotic guy’s shed full of alligators is on fire, and it all concludes with Mr. Exotic in prison for hiring a hitman to assassinate his rival because he thinks she put her husband in the meat grinder!

Perhaps after all that chaos, we needed a more sophisticated take on the human experience, and Netflix provided. Our moody and stunningly beautiful protagonist Beth Harmon of “The Queen’s Gambit” is gifted with an intensely intelligent, yet tortured mind that throws her into the depths of addiction. Yet neither of these shows come close to the display of raw carnage in “Squid Game.” It can’t get more primal than people literally killing each other off for the slim chance of escaping their dire financial situations. I did not expect to see a show so terrifying before I could even watch “Monster House” this Halloween—don’t laugh at me, that movie is a lingering horror from my childhood.

These shows don’t end with their final episodes, as social media trends quickly capitalize on their memorable themes and characters. I’m sorry, but can we talk about Tik-Tok for a second? It all began with the assault of that bizarre Tik-Tok sound combining Megan Thee Stallion’s “Savage” with Joe Exotic’s famous line about Carole Baskin killing her husband. Then my feed was flooded with excessively edited videos of Anya Taylor-Joy and Thomas Brodie-Sangster being their beautiful selves. Now I am constantly haunted by a freaky robot doll singing “Red Light, Green Light” in Korean.

The aesthetics of these shows could also not be far from different, and yet merchandise has also surfaced for all of them. I work at a gift shop and we are still trying to get rid of all the “Hey all you cool cats and kittens!” mugs from last year.

While  remnants remain of the previous hits, our interest is quick to wane and we frantically seek something to recapture it. “Squid Game,” has already reached larger than “Tiger King” and “The Queen’s Gambit” combined. At the start of October, Forbes reported it had become the number one show in 90 countries. Breakout star and lead actress from the Korean drama, HoYeon Jung, has seen her follower count on Instagram increase by a whopping 15 million in just three weeks. The primary garments seen on the show, a simple green tracksuit and the red guard uniform, are being sold by numerous companies labeled as Halloween costumes. According to data from The Sole Supplier, sales of white Vans—the shoes worn by the game contestants—have gone up by 7,800 percent since the show’s release.

My speculative reasons for the popularity of these series may not come to a clear conclusion. Ultimately, it seems rather obvious; they are accessible, have short runtimes, and contain plenty of iconic moments and characters to spark social media frenzies. Whether you ultimately despise one of these shows or view it as a cinematic masterpiece is less important than the fact that it is entertaining and distracting. There may be something telling in the fact that the physical and emotional violence portrayed in “Squid Game” is something we have embraced as a welcome escape from reality. I don’t know, I don’t have my psychology degree quite yet.