Twin Cities theatre is back: What the Constitution Means to Me

18 months since the onslaught of the pandemic, and weeks since Brodway reopened, the Guthrie Theatre in Minneapolis welcomed guests back to the first show of their 2021-2022 season; “What the Constitution Means to Me,” by Heidi Schreck. Reporter: Jack Fischer 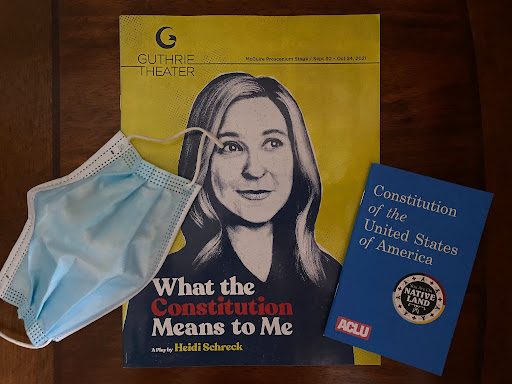 Jack Fischer
A mask is required to return to the Guthrie. Attendees are given the playbill for “What the Constitution Means to Me” and a pocket Constitution donated by the American Civil Liberties Union to help follow along during the show. " />

Jack Fischer
A mask is required to return to the Guthrie. Attendees are given the playbill for “What the Constitution Means to Me” and a pocket Constitution donated by the American Civil Liberties Union to help follow along during the show.

Governor Tim Walz signed Executive Order 20-04 on March 16, 2020 closing all non-essential businesses. Since then, the Guthrie Theatre stages and set sat dark and empty. Finally, after 18 months of closure and two weeks after New York’s historic Broadway reopened on September 14, the Guthrie welcomed guests back on September 30.

“What the Constitution Means to Me” by Heidi Schreck is an incredibly timely show, written in 2017, but given recent historical events like the death of reverend Ruth Bader Ginsburg, and the passage of Texas’ Senate Bill 8, a bill that bans all abortions after just six weeks, Schreck’s memoir could not be more timely.

The show follows Schreck, as she reflects on the speeches she gave during an oratory competition through the American Legion about the constitution, and what it personally means to her. Schreck, played by Cassie Beck, hilariously recounts her time in dozens of Legion Halls, speaking to dozens of old White men, and begs the audience to reevaluate, who was the constitution really written for?

The show is quaint, taking place in an American Legion Hall with just three actors total. Beck as Schreck, Mike Iveson as Legionnaire, and Jacelyn Shek and Emilyn Toffler alternating as Performer. The show is a hilarious, yet sometimes somber monologue, with a quick runtime of just 100 minutes and no intermission.

It felt apt that this show be the first to return to the Guthrie after such a grueling past 18 months in the Twin Cities. From the murder of Geoge Floyd to a contested and anxiety ridden election, from January 6 to the egregious attacks on Roe v. Wade, “What the Constitution Means to Me” will challenge the audience’s preconceived notions on the Constitution, and invite them to participate in imagining how we move forward as a society.

The show is running until October 24 on the McGuire Proscenium Stage. The Guthrie is requiring guests to wear facemasks and present their COVID-19 vaccine card with a complete series or a negative PCR test prior to seating. The Guthrie is not serving food or alcohol during shows, and their restaurant is closed.