Local drag performers took to the stage for the 25th year of the Spectrum’s drag show. Spectrum was able to bring the popular event back in person after the show took place virtually last year. 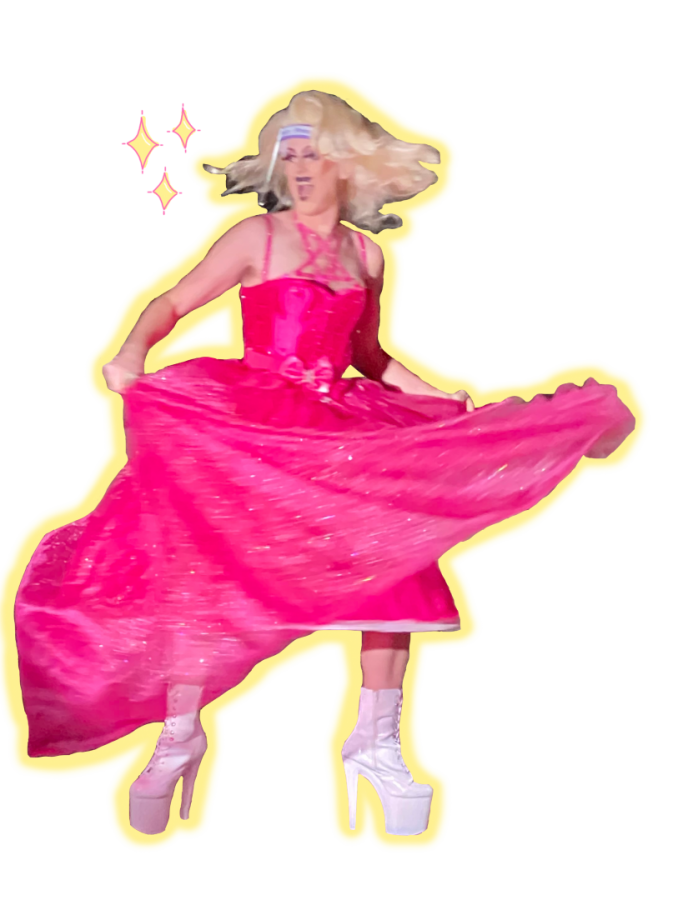 Taleah Alldritt
Trisha Spectacle dazzled the crowd with their lip sync of the hit song, “Popular,” from the Broadway Musical “Wicked” during this year’s annual drag show. " />

Taleah Alldritt
Trisha Spectacle dazzled the crowd with their lip sync of the hit song, “Popular,” from the Broadway Musical “Wicked” during this year’s annual drag show.

The excited chatter grew progressively louder as students gathered with their fall coats and picnic blankets. When the great clock rang at the top of the hour, it was time for the show to begin. Spectrum hosted the 25th annual drag show on the evening of October 14 in front of Old Main, finishing up the Coming Out Week itinerary.

Last year’s show was prerecorded and streamed virtually. Junior Ryan Geiss, secretary and interim treasurer for Spectrum, explained the significance of being once again back in-person for the anticipated event.

“We used to always do it inside Bush Ballroom … but having it on the grass there was a lot more option[s] for more people to come and social distance for what they’re comfortable with,” Geiss said. “I remember virtual, we had like a watch party in our Discord … having so many people this year was amazing.”

Taking place outdoors, the vibrant garments of performers were clearly pronounced against the dark fall atmosphere. The pavement in front of Old Main, as well as the steps leading up to the building, served as the stage. Performers could interact intimately with the crowd, who sat on the surrounding grass and held out cash tips. The line up for this year’s show included four local performers: queens Trisha Spectacle, Sissy Tops and Miz Diagnosis, and king Tyler T. Love.

Trisha Spectacle is a member of Queerdo Minneapolis, a local performance art group. She is well known for performances that play off popular media. Regular attendees may recall their performance as Velma from Scooby Doo last year. She began the show adorned in a striking yellow and black dress, leaving the crowd buzzing with the opening number “Bees,” that included audio from “The Bee Movie.”

Students had glowing praise for Trisha Spectacle’s performances that utilized the multimedia format of drag to tell a story. “She did such a good job,” junior Riley Maroni said.“The Bee Movie routine was everything. The spoken word parts were such a show of technical skill,” junior Clare Foy said.

Tyler T. Love was the only king who performed, and he quickly captured the audience’s hearts with a lip sync to “There’s Nothing Holding Me Back,” by Shawn Mendes, providing each tipper with a personal moment of serenading.

Students appreciated the inclusion of diverse gender representation within the performances. “I really liked that they included a drag king,” Maroni said.

“Heartthrob. I liked the 2000s vibes, the rhinestones were everything,” junior Sarah Olson said.

Geiss did much of the planning for this year’s show, and provided some insight into the process of contacting performers.

“We just keep like a database of queens we’ve worked with in the past, or the ones we’ve reached out with that have said ‘oh sorry I can’t this year but maybe next year’,” Geiss said. “If I get more queens than I can handle then I just say ‘I’m sorry I didn’t plan for this many to respond!’”

Miz Diagnosis performed at Hamline for the first time and did not disappoint. She gave two distinct performances; for “Miz-Toucha” she catered to the Halloween spirit with a mash-up including “Touch-A, Touch-A, Touch Me” from “The Rocky Horror Picture Show” and for “Fergie BOOO” she brought the essential sass to the classic “Fergalicious” by Fergie.

Another returning performer from last year’s show and member of Queerdo, Sissy Tops, stunned the crowd with her soulful vocals during a performance of “Creep” by Radiohead. Dressed in a plaid ensemble, the lights flashed a vibrant red during the song’s chorus. There was praise for both Spectrum’s production of the event, as well as Sissy Tops’ use of vocal performance.

“I thought it was really cool, especially knowing the swiss army queen. Making your own costumes and doing your own vocals, like who does that? It’s so much work, it’s incredible,” junior Anika Duckwall said. “I think Spectrum produced it very well. The fact that we were outside and they were able to get that quality of sound design and lighting was really impressive.”

The show finished off with another number by Trisha Spectacle, who twirled in a bright pink gown to the song “Popular” from the musical “Wicked.” The annual drag show’s return to a live audience was an overall success. Students and performers were able to mask up and socially distance safely, while still getting to cheer on and interact with the talent live.

“I also got the final count of 120 people in attendance which is a little less than what we would get pre-covid but much more than who watched the virtual show last year,” Geiss said via email.

Keep an eye out for Spectrum’s upcoming events. Queer Sex Ed is planned for October 25, where students can discuss all that was left out of their health classes. The Trans Day of Remembrance Vigil will also be taking place soon. Updates and information can be found on Instagram and Facebook @huspectrum.