Not your parents’ Oklahoma!

Diversity, a stripped down set, electric guitars and projection screens bring a different, darker look to the Rodgers and Hammerstein Classic. 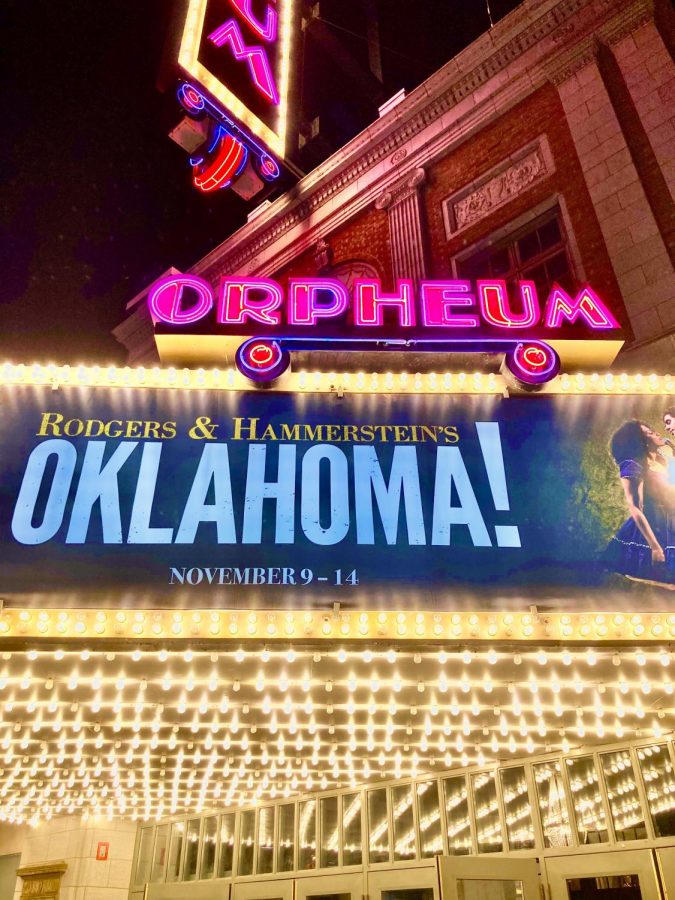 Jacob “Coby” Aloi
The touring production of the classic musical klahoma!“Oklahoma!” as reimagined by Daniel Fish for the modern day, made a stop at the Orpheum Theater in Minneapolis this past week, and will continue on next to South Carolina. " />

Jacob “Coby” Aloi
The touring production of the classic musical klahoma!“Oklahoma!” as reimagined by Daniel Fish for the modern day, made a stop at the Orpheum Theater in Minneapolis this past week, and will continue on next to South Carolina.

In 1943, “Oklahoma!” opened on Broadway and changed the future of theater. The show that many consider the first modern musical was revolutionary for its time and has held a special place in the hearts of theater goers worldwide. The timeless tale of cowboy Curly McLain and his efforts to win the love and favor of Laurey Williams has graced many community theaters and high school auditoriums. With the well known stories of the characters Jud Fry, Will Parker and Ado Annie, “Oklahoma!” has always been seen as a classic, a safe period piece for theaters to produce. However, director Daniel Fish’s revival takes a completely different approach to how the show operates.

Originally reinvisioned at Bard College, a much darker, grittier revival of “Oklahoma!” opened on Broadway in 2018 and has garnered a large following for its innovative take. That same production, which many have called “Sexy Oklahoma,” has now been restaged and is touring the nation, with performances last week at the Orpheum Theater in Minneapolis.

This production put the show in the hands of a diverse pool of actors, musicians and designers to tell the story. The musical, traditionally starring white cis-gender actors, now stars multiple people of color with different backgrounds. The band, which is usually a full orchestra, has been switched out for what looks like an indie folk band, and the set is reduced to two simple walls, a handful of picnic tables and a set of gun racks. The utilization of projections and harsh lighting are also central to setting the atmosphere.

The story also takes on a new, darker look with the choices the actors and director have made. The script however remains almost completely intact from 1943—which seemingly asks the audience if they can see the darker themes that have always been there. Standout moments that make the show a much more haunting production include a scene completely in the dark where Curly and Jud discuss Jud’s psychosis, as well as the penultimate scene that turns graphic quickly. While many critics and audience members enjoy the fresh take on it, a number of other theater goers do not—some even leaving at intermission.

Some memorable performances are from vocal artist SIS as Ado Annie, who makes the role completely her own, as well as Chritsopher Bannow’s Jud Fry—which is a much quieter, sadder take on the character than the over the top villain most productions make him out to be. Sean Grandilo and Sasha Hutchins also have excellent chemistry as romantic leads Curly and Laurie, and Hennessy Winkler’s Will Parker is equal parts charming and loveable.

While the Twin Cities have said happy trails to “Sexy Oklahoma,” the production featuring a very talented pool of performers can be seen throughout the United States for the next year. Visit oklahomabroadway.com for more information on dates, locations and how to get tickets.