The race for student body presidents 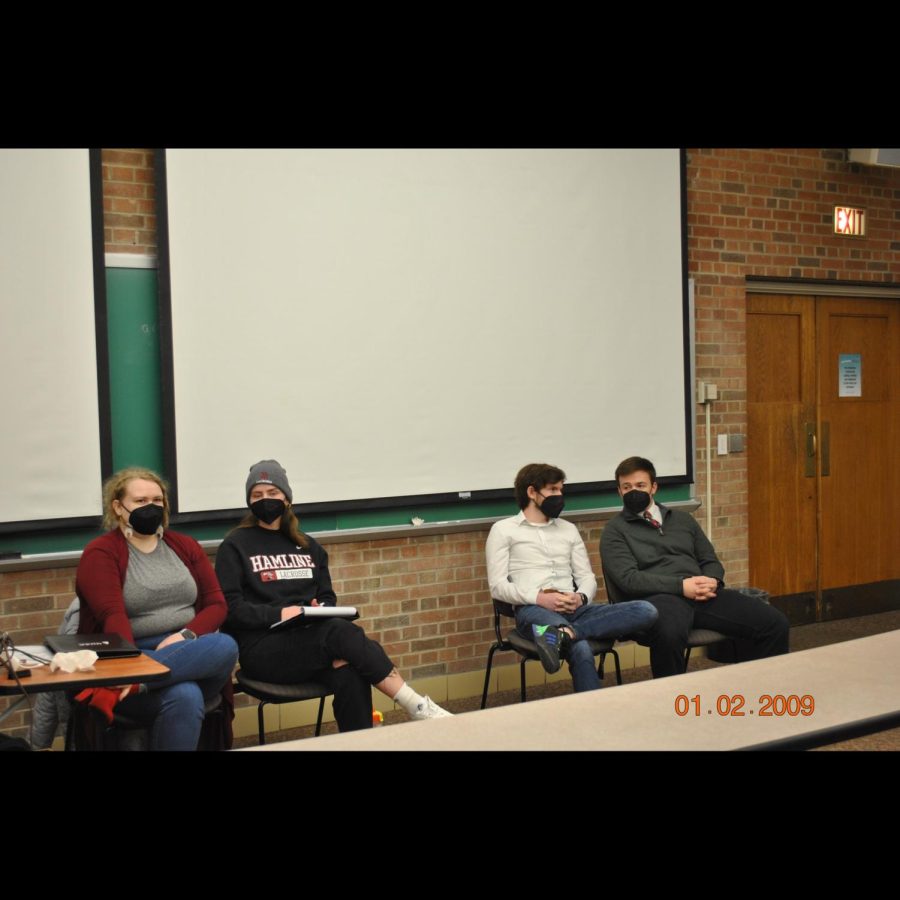 The race for 2022-23 Hamline Undergraduate Student Congress (HUSC) co-presidents has officially started, after candidates submitted their petitions to appear on the ballot and recently appeared in an informal debate.

In the spring of 2021, Hamline students passed a resolution changing the roles of HUSC President and Vice President to External and Internal Presidents, widely referred to as co-presidents. Currently, the External President is Hamline senior Raina Meyer and the internal president is junior Ruben Dominguez.

Three teams are running for 2022-23 HUSC co-presidency. Sophomore Maddie Swanson and junior Emily Hilderbrand are current members of the HUSC executive board and are campaigning to positively affect the impact Hamline leaves on students.

Sophomores Skyler Rush and Spencer Olson have not served on HUSC, but are running on a platform of “leadership that listens.”

In a surprise February 18 announcement, current HUSC executive board members and juniors Lisette Guzman and Lindsey Rajala announced their candidacy. Guzman and Rajala will not be on the ballot, and are encouraging supporters to write them in.

The informal debate was held on February 17. Over 30 students gathered virtually and physically in Drew Science Center 118 to listen and ask questions of official candidates Swanson, Hilderbrand, Rush and Olson. The event served less as a debate and more as a chance for candidates to speak on their experience, platforms and plans.

“HUSC’s tagline is your voice HUSC, and I think the most important questions come from the student body,” Severson said.

The debate began with candidate introductions.

Swanson, who is running for internal president, is a public health and environmental studies double major. She is involved in the women’s lacrosse team, as well as the wind ensemble and Food Steering Committee. Swanson serves as the technology coordinator on the HUSC executive board.

Hilderbrand is running for external president, and is a religion and social justice double major with a minor in digital media arts. They are also Hamline Undergraduate Programming Board (HUPB)’s special event coordinator and the HUSC political affairs chair.

“We believe the impact that Hamline leaves on you matters, and that impact is created every day,” Hilderbrand said.

Their platform is focused on impact, engagement andtransparency, and they plan to increase food accessibility on campus and HUSC engagement with the student body. Between Swanson and Hilderbrand, they have five cumulative years of HUSC experience.

Rush is running for internal president. He’s a business management major, and is a member of Theta Chi’s Hamline chapter.

External president candidate Olson is majoring in international business with a Chinese minor. He is a member of the US Army Reserves and is a former member of Theta Chi.

Rush and Olson are running on a platform of “leadership that listens,” and hope to increase disability access on campus and HUSC transparency.

“From the rumblings and mumblings of students that I’ve talked to and gathered with, they’d appreciate a lot more transparency [from HUSC]… effective leadership begins with listening to your people. Not to say that HUSC hadn’t been doing that, but I feel like an emphasis upon that would make this a lot more successful, and create a more engaged student body,” Olson told the Oracle.

Many students who attended were pleased with the candidates’ answers as a whole. Sophomore Charles Berg believed the conversation was constructive.

“I think that we learned a lot about each candidate on both sides and how they would deal with separate issues,” he said.

Students also valued the opportunity to learn a bit about the candidate’s themselves.

“I thought all of the candidate’s responses were well thought out and insightful. I found the debate to be interesting hearing about each candidate’s perspective as well as their prior experience,” Sophomore Chloe Kucera said.

Many members of Theta Chi, Olson’s former and Rush’s current fraternity, showed up to listen to the debate.

“I think it’s good that we have two people running and HUSC doesn’t just cycle through people running unopposed over and over,” said Rob Finnestad, Theta Chi president and Hamline sophomore.

For Finnestad, the most important issues in this election are gym access for non-athletes and disability access on campus.

Kucera and Berg both care most about electing co-presidents who will listen to the student body. For Hamline sophomore Kate Kelly, the most important factor in deciding who to vote for is credentials, a sentiment echoed by many of the questions on experience asked by students during the debate.

As HUSC’s public relations chairperson, Severson ran the livestream during the debate. From monitoring the questions in the livestream chat, she believes that as a whole, students care most about social justice issues.

“There’s a lot of concerns of helping the students more in a more timely and transparent [manner],” Severson said.

For students interested in learning more about the candidates, the informal debate can be viewed on HUSC’s Instagram (@yourvoicehusc). The formal presidential debate will be held Wednesday, February 23 at 7p.m. in Sundin Hall and HUSC General Assembly meetings are held on Tuesdays at 11:30 p.m. in West 204. Voting opens on Feburary 28.

Swanson and Hilderbrand’s platform can be found on their Instagram, @emilyandmaddieforhusc.

Write-in candidates Rajala and Guzman’s information can be found on their Instagram, @lizlin4president.