Courtney Broyles Gets in the Zone

Rachel Peterson got the chance to sit down with friend and former teammate Courtney Broyles to discuss her success at MIACs and what that meant moving forward. 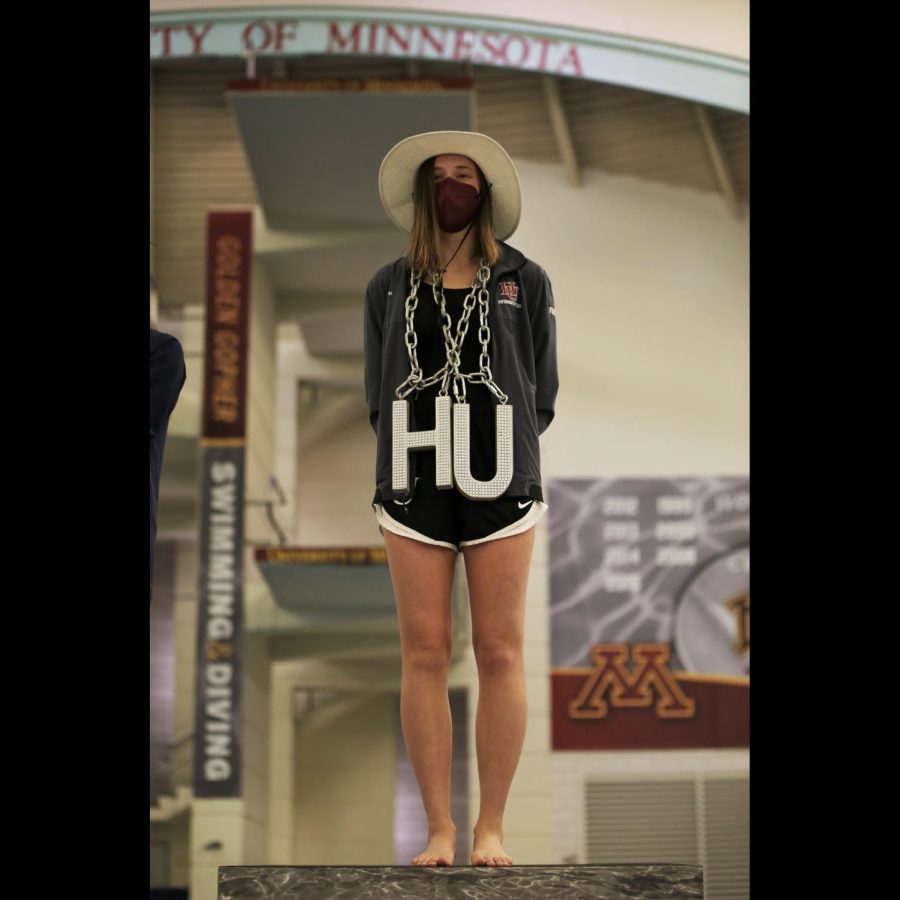 You’ve accomplished a lot since last speaking to the Oracle. Going into MIACs, did you have any idea about how you’d place or the scores you’d get?

Broyles: Kind of. I had no idea, but I had goals for the scores I wanted to get. I didn’t really think about placement at all until 1-meter because I was told that it would be more difficult for me to make it to finals on one meter than it would be on three which is true. I definitely had to do better than I did on 3-meter.

You became the MIAC champion for the 3-meter board, what was that experience like?

Broyles: It was really surprising. I don’t look at my scores when I dive at all. I don’t look at the scoreboard because historically if I look at my scores I start to calculate ‘oh if you got 6s on that dive you need to get 7s or whatever it is on this next dive to get this score’ and then instead of thinking about the actual dive I’m thinking about mathematical calculations so I’ve just stopped doing it. I had no idea about my score, I had no idea what place I was in, I had no idea what anyone else was. After the last dive, Spencer, my teammate, came up over and was like ‘oh my god, did you see that?’ and I was like ‘oh see what?’ and she goes ‘you’re literally in first’ and i was like ‘oh cool’ so that’s how that went.

You broke the school record for the 1-meter board. As a freshman, was that a goal that you had your eyes on?

Broyles: Kind of. Coming in as a freshman, I don’t think I’d ever broken 350 at that point. That might be a lie because I don’t pay attention to what I score, but I was pretty far off  from the record when I came in as a freshman. I remember my freshman year Casey’s goal for me was to make it to finals, so whatever score I needed to do that was the goal.

Was it a goal you had this year?

Broyles: It was but it wasn’t specifically like ‘oh I want to break the record’. The record was a half point to a point higher than the Zones qualifying score so it was like ‘oh if I can qualify for zones, I can break the record’. It was more that than breaking the record.

I did the math, you scored 22.6% of the points for the Women’s team by yourself at MIACs. Do you feel that in swimming and diving, that the contributions of the divers are taken seriously?

Broyles: In general, no. I have been on a team in high school that had state champion divers every year while I was there. Every year we sent someone to state and every year they scored us a bunch of points but the head coach didn’t really give us the time of day and there were 16 of us, we had a big diving team. We were just a little extra on the side, [to] score us a few extra points, even though we’d sometimes be the difference between winning and losing a meet. I also know there are a lot of swimming and diving teams where the divers are completely separate from the swimming team. They practice [at] separate times, they have separate coaches, they’re not included in anything, it’s just how it is. I think it helps that we have a smaller team, we’re not 100 people and the dive team is 2 people so that is super helpful in making sure that we are part of the team and we contribute. I think our team does a good job of making sure that the divers are a valuable part of the team, not just there.

What was Zones like, was it similar to other meets you’d been to?

Broyles: Yes and no. It was more similar to the diving MIACs my sophomore year during COVID because we had a meet at GAC where we did 11 dives on both boards and we counted it as our MIACs because [MIACs] didn’t actually happen last year. It was more similar to that than MIACs. There were no prelims or finals, it was 11 dives, that’s it, that’s your score. There were just divers there so it didn’t feel like a swimming and diving meet. It was just Zones if that makes sense but it was fun.

You practiced the week leading up to Zones and your teammates did not, was that helpful, not helpful? Why?

Broyles: I’d say that it was about the same [as] throughout the year. The swimmers would practice prior to the dive practice because we can’t have all the lanes gone for the diving boards so I was used to not having swimmers there anyway. The biggest difference was Spencer not diving but she still  came to all the practices and would hang out. The swimmers would also come and chit chat for a little bit and hang out so that was super nice just so that I wasn’t practicing alone for the whole week.

Your scores at Zones were lower than we saw them at MIACs, what was the difference? Did it surprise you?

Broyles: I was personally not surprised. I was just talking about how scores are never going to be the same. We had a whole new panel of coaches as judges so it’s all different. We did have some coaches that were in the MIAC but we also had a bunch we had never dove with before. It makes sense that different coaches are going to catch different things about your diving especially if they’ve never seen it before. Also it was Zones so it makes sense that they’re judging a little bit harder than [at] conference or a normal meet.