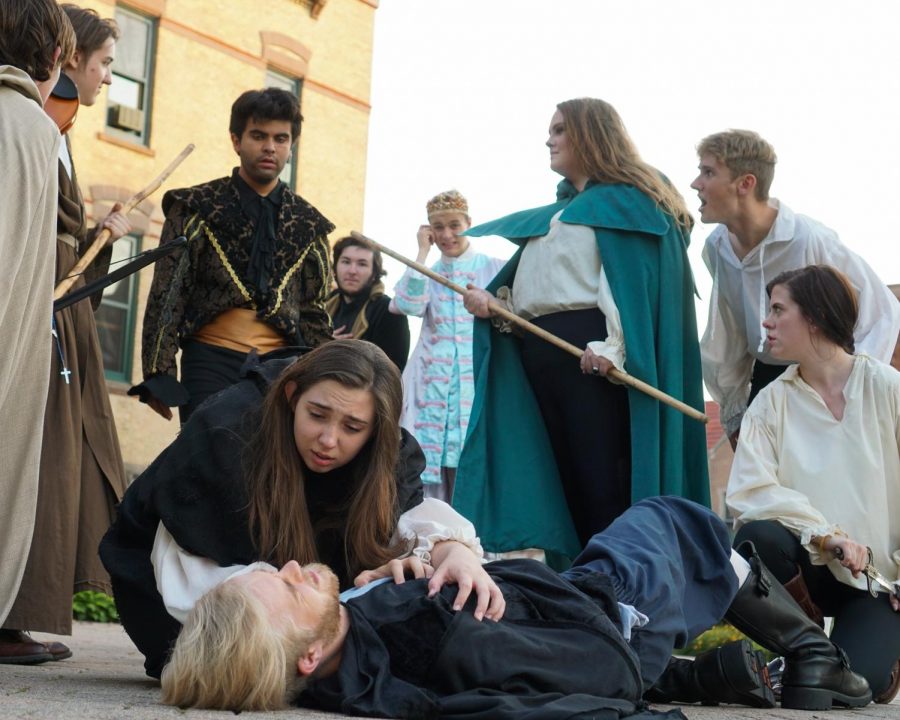 Improv, feminism, and a dash of chaos star in ‘Robin Hood’

When sophomore MJ Luna and junior Autumn Wilkie attended the United States Institute for Theatre Technology (USITT) annual conference over spring break, they both brought back souvenirs. Luna returned with a hammock, and Wilkie with the budding foundations of her own theatre troupe.

“One of the things they were really stressing [at USITT] was that if you aren’t seeing the theatre, [if] you’re not being able to do the theatre that you want to do, you can just go do your own theatre. No one’s stopping you,” Luna said. “Autumn really took that to heart. Later that night she came up to me and was like, would you want to start a theatre company with me? I said yes, as you do, ‘cause why not?”

The end result of this thought process was Meraki Theatre Company [MTC], a newly registered student organization that kicked off Hamline’s theatre season with the yearly tradition of an outdoor play on Old Main lawn. “Meraki” is a Greek word describing a labor of love, which the company is to Wilkie.

Under Wilkie’s direction, MTC staged a feminist rendition of “Robin Hood” with a script largely written by the cast and crew. In this adaptation, the titular character is the alter-ego of Maid Marian, while in the traditional tale the two are lovers.

“I’d never directed before… I [didn’t] really have money to go and buy a script for a bunch of people,” Wilkie said. “For the first month that we rehearsed, it was just a bunch of improv exercises. I came up with the plot of the show, and then I would come to rehearsal with new scenes for them, outlines that I wanted them to develop.”

Senior Grace Busse, who played Much, appreciated this creative direction.

“I’ve had the privilege of participating in Hamline theatre for a few years now,” Busse said, “but never in my life have I experienced something as uniquely chaotic and lovely as Meraki’s ‘Robin Hood’.”

The feminist subtext in MTC’s take on the classic English legend struck a personal chord for Wilkie, who struggled with her faith in her formative years amidst conflicts with church leadership.

“Growing up, I went to a church that didn’t support women going and being leaders. It was really hard for me to find leadership positions where I was,” Wilkie said. “When I finally left that church, I realized, ‘oh, that’s not how everyone thinks’… It was just amazing to step into something that I was so passionate about, and not having anyone tell me that I can’t do that anymore.”

Wilkie is confident of the path she wants to take in her thespian future.

“Here at Hamline… I’ve tried out a little bit of everything: scene shop, light shop, stage managing, acting, now directing. I think directing is the direction that I want to go,” Wilkie said.

Luna, meanwhile, is manager of the Hamline scene shop and wants to earn a graduate degree in technical theatre.

At the student organization fair on Sept. 10, over 50 Pipers took interest in participating with MTC, and the troupe decided on their second show: “Alice in Wonderland.” They hope to claim a slot on the Anne Simley stage in February.