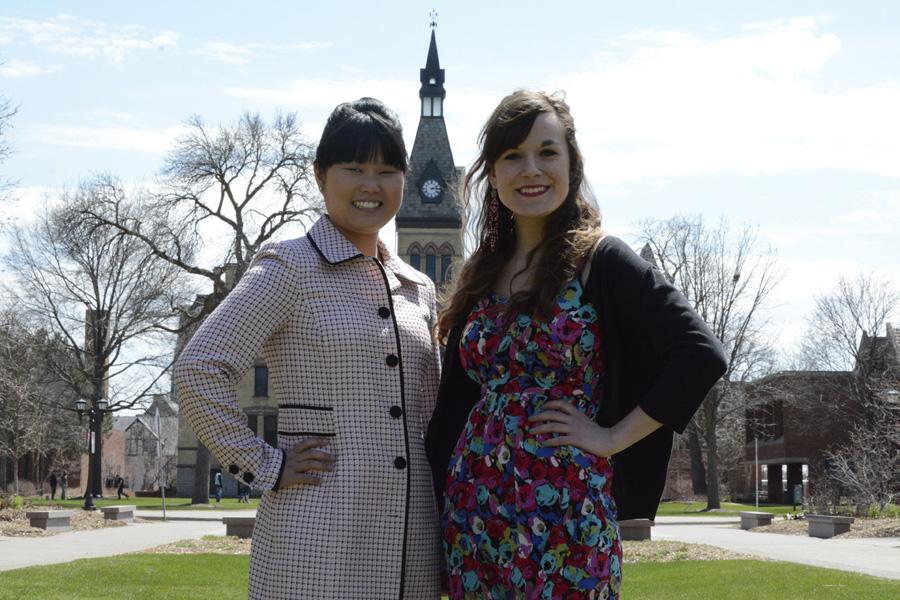 Fulbright recipients reflect on their academic journeys and express hope for future.

Fulbright is a scholarship program which was set up by U.S. government in 1945 to promote diplomacy between the U.S. and other nations. It has awarded grants for teaching and research to thousands of scholars across the nation.

Potter, an English major and communication studies and German double minor, will depart for Hamburg at the end of the summer. She credits her now-retired adviser Russ Christensen with helping her along this process.

“He was pushing me to do this for a very long time,” she said. “He shepherded me through the application process, and I couldn’t have done it without him.”

Potter explained that the application process for Fulbright scholarships is fairly lengthy, and as a result she was more interested in the teaching scholarship while applying since it was less rigorous than the research scholarships.

“I didn’t know where my academic interest would be in a year while I was applying,” she said.

Originally from Ely, Minn., Potter expressed her appreciation of the various opportunities she’s had between the small high school in her hometown and the minimal class sizes at Hamline.

“I’ve always been very lucky to be in an academic community small enough to support and inspire individuals,” she said. In Ely she was involved in speech and theater, and she served as the editor in chief at her school yearbook for three years. She began taking German classes in 9th grade, and got the opportunity to travel through Europe, visiting Germany, Switzerland and Liechtenstein.

“I got a little taste of Germany and I always knew I would go back,” she said. “High school planted a lot of seeds that are now coming to fruition.”

Potter is now fluent in reading and writing German, and can speak basic sentences. Language proficiency is required by the Fulbright applicants to Germany, and thanks to the scholarship, Potter said that she’s very excited to further her study of German and hopefully attain fluency.

She believes that her time abroad will allow her to “spend time in a different cultural context and absorb an expanded worldview.”

For future applicants to the Fulbright program, Potter offered some advice:

“It can be difficult to come into college and for me it was difficult to step out of my comfort zone and meet with professors outside of class…but in doing so, that’s when all the opportunities really started to unfold; when I took the initiative to meet with them. The opportunities are there and you can get them if you want them.”

Otto also expressed her appreciation of the role of the Hamline faculty and community throughout her application process.

“Hamline’s been great, and they have totally exceeded my expectations,” she said. “After the story [about the Fulbright scholars] on the Hamline website went up, I received probably 40 emails from people I knew and people I’d never met just wishing me all the luck, and the support has just been phenomenal.”

Otto decided to apply for the Norway scholarship late last summer, because she had just been doing research on teaching abroad, and she personally knew some of the Fulbright recipients from past years. She also had a special interest in Norway, because her adoptive family has Norwegian heritage, and because Minnesota has derived much of its culture from Norwegian immigrant communities.

“I decided to apply on a whim without any real expectations because the Norway program only picks two people,” she said. Otto will find out within the next few weeks whether the two principal candidates for Norway will accept their awards. If they do, she will likely spend her summer in the U.S.; but if one of them declines, she will depart for Norway in August to teach at any of its three universities.

Since the Norway program is so small, Otto was personally interviewed via Skype by the Fulbright Foreign Scholarship Board.

“A lot of countries don’t do that because they accept hundreds of people,” Otto said. “It was really bizarre; I’ve never done a Skype interview before. I got to ask them questions too, and they asked me some questions that I didn’t expect, like what books I was reading right now. They gave me some good advice and told me to be prepared to learn and be challenged.”

Otto expressed her hopes for her time studying abroad.

“It’s all about learning for me; it is going to be the most challenging thing I have ever done,” she said.

Otto is particularly interested in the Korean adoptee population in Norway, and plans to get involved in their community. As a Korean adoptee herself, she has been involved with Kamp Kimchee, a Korean culture camp in Baxter, Minn. for much of her life, and during the summer works as a self-esteem director there.

Otto also has many extracurricular interests, and in her hometown of Grand Rapids, Minn., she participated in a cappella choir, jazz choir and speech. At Hamline she is also involved in Fusion and the Hamline University A Cappella Choir.

To future Fulbright applicants, she said:

“It never hurts to apply. The process is lengthy, but get others to read over what you write, and it’ll be worth it. You are going over to teach or to research, but the reality of it is, you’re going to learn: about others and about yourself. Don’t be scared.”